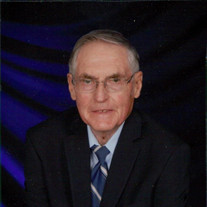 ADRIAN—Robert N. Stevenson of Adrian Township passed away March 11, 2020. He was born June 24, 1936, in Adrian to Everett and Louise (Baker) Stevenson. Bob graduated from Onsted High School in 1954, where he played football and ran track. Robert proudly served in the U. S. Navy aboard the U.S.S. Salem and the U.S.S. Monticello from 1955-1959. After serving in the Navy, he returned home to farm with his dad on the family farm. He loved farming and being outside. He had a passion for all animals great and small. A friend then introduced him to the love of his life, Elaine Faust. It was one blind date, a few months of dating and they became man and wife on November 25, 1960. Only eight more months and they would have been married 60 years! Bob worked at the Michigan Department of Highways and Transportation, Adrian garage for 35+ years. He was a heavy equipment operator, snowplow wizard, and facility/grounds coordinator. He took pride in every job, no matter how big or small, and was very particular. One of the most memorable times on this job was when the blizzard of 1978 struck and he was separated from his family for 5 days, later telling how he slept on the salt stacks, and how his truck got stuck in a snow drift taller than his truck. Bob liked to be busy, so after retirement he became a part-time mail carrier at Adrian College for 13 years. He made many friends at AC. Besides his family, one of his many joys in life was caring for his yard and flowers. In addition, he was an avid reader of WWII books. He also was the best dog walker and loved his “grand-dog” Dougan, but more over he loved his cat BC, no matter how naughty she was. Where Bob was, BC was. Bob was a confirmed member of St. John’s Lutheran Church, and he attended Hope Lutheran Church as well. Robert is survived by his wife Elaine, daughters Deb and Tammy (Nick) Duede, sisters-in-law Janice Stevenson and Sandra Harris; brother-in-law Fred Faust, as well as other nieces, nephews, cherished “extended” family including Mary Beth Leibold, Cathie, Brian, Adam, Aimee and Ashlee Lewis. His love for you reached far and wide! During the past few weeks the Stevenson family would like to extend heartfelt thanks to the many individuals that provided love, comfort and care, friendship, transportation, meals, medical and health care such as dad’s nurse Itiya (we love you), Beth Leibold, Jan and Otto Bilkey, Cathie Lewis, Bill and Pam Wolkins, Patty Pompos, the Toledo Hospital med team that tried every avenue possible, Pastors Sarrault and Herter, and many church friends. We could not have made it through this journey without you! At Bob’s request cremation will take place and memorial services will be held at a later date. Arrangements are being made through Wagley Funeral Home where online memories and condolences may be shared at www.WagleyFuneralHomes.com. Donations in loving memory of Bob can be made to the Leukemia and Lymphoma Society, as well as St. John’s or Hope Lutheran Church. Bob found the best in every day, loved life, and was kind to every person he met. Thank you for being part of his life.

ADRIAN&#8212;Robert N. Stevenson of Adrian Township passed away March 11, 2020. He was born June 24, 1936, in Adrian to Everett and Louise (Baker) Stevenson. Bob graduated from Onsted High School in 1954, where he played football and ran track. Robert... View Obituary & Service Information

The family of Robert N. Stevenson created this Life Tributes page to make it easy to share your memories.

Send flowers to the Stevenson family.