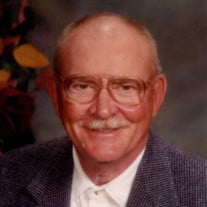 OGDEN – Robert E. Spotts, 91, of Ogden Center died Wednesday evening, December 23, 2020, at Provincial House in Adrian with his loving family by his side. Born January 31, 1929, in Ventura, California, he was the only son of Earl Henry Spotts and Berniece (Stock) Heineman. Robert grew up in Blissfield and proudly graduated from Blissfield High School in 1947. Robert answered the call of duty and served in the Navy during the Korean War. He was a cook aboard the ships the Poconos and the Little Rock. Upon returning stateside, Bob began his career with Merillat Cabinetry. He was employed with the company until his retirement. Robert was an active member of the Blissfield First United Methodist Church. On July 4, 1953, Robert married Darlene A. Cochran at the Blissfield Presbyterian Church. She survives to cherish over 67 years of memories created together. In his spare time, Bob loved watching sports, especially anything Michigan. The Tigers, Lions, Red Wings, and Pistons, Bob loved Detroit sports and found joy in each sporting season. A devoted father and grandfather, he also loved to attend all his children’s and grandchildren’s sporting events. In his younger years, Bob also enjoyed deer hunting and fishing. In addition to his wife, Darlene, Robert is survived by his children, Sherry (Craig) Holubik, Lori Spotts, Thomas (Renee) Spotts, Timothy (Gail) Spotts, and Todd Spotts (Charles Herman); grandchildren, Jason (Kay) Holubik, Justin Holubik, Ashley (Andrew) Munson, Cody Spotts, Tyler Spotts, and Clint (Zeina) Spotts; and four great-grandchildren. He was preceded in death by his parents and his daughter, Cindy Spotts. All services for Robert will be private. Wagley Funeral Home, Tagsold Chapel, Blissfield has been entrusted with arrangements. Burial will take place in Ogden Township Cemetery. The family suggests that memorial contributions to honor Robert be made to the Blissfield First United Methodist Church. The family would like to thank the staff at Provincial House for all of the care, love, and support they have provided to Bob and the family while he was a resident there. Online memories and condolences may be shared at www.WagleyFuneralHomes.com.

OGDEN &#8211; Robert E. Spotts, 91, of Ogden Center died Wednesday evening, December 23, 2020, at Provincial House in Adrian with his loving family by his side. Born January 31, 1929, in Ventura, California, he was the only son of Earl Henry... View Obituary & Service Information

The family of Robert E. Spotts created this Life Tributes page to make it easy to share your memories.

Send flowers to the Spotts family.