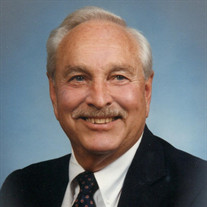 MANITOU BEACH – Robert E. “Bob” Price, age 93 of Manitou Beach, passed away Tuesday, March 20, 2018 at his home. He was born February 16, 1925 in Niles, Michigan, the only son of Gorton and Marion (Wright) Price. He graduated from Royal Oak High School and went on to earn a Bachelor’s Degree in Engineering from his beloved Michigan State University. During World War II, Robert was a proud member of the United States Marine Corps, serving in the Pacific as a tail gunner on a dive bomber. In 2001, he married Rosemary Cohen, and she survives. Bob and Rosemary enjoyed many years of travel and time in Marco Island, Florida. Bob joined his father in the family business, Primore – Sedco, after graduating from college. He was not only gifted as an engineer, inventing many of their products, he was also respected for the work environment he created for all of his employees. Bob loved Lenawee County and was a strong supporter of Boys and Girls Club, Hospice of Lenawee, Lenawee Humane Society, Croswell Opera House, Adrian College and Siena Heights University. He was a member of the American Legion, VFW, Elks, Lenawee Country Club and Devils Lake Yacht Club, and was a devout Michigan State University and Detroit Lions fan. He loved flying and sailing. In addition to his treasured wife, Rosemary, he is survived by a daughter, Kimberly Price of Manhattan, granddaughter, Lucy Young, and countless friends. Besides his parents, he was preceded in death by a sister, Charlotte Parsons; daughter, Penny Desmet, and son, Gary Price. A celebration of Bob’s life will take place from 3 to 8 p.m., Tuesday, March 27, 2018, at Wagley Funeral Home. Special thanks for excellent care to the nursing staff at Hospice of Lenawee as well as Jodi Stokes, Andrea Ramos, Tiffany Gary, Sally Tubbs, Amanda Crawford and Gretchen Streussnig. In lieu of flowers, contrubitions in memory of Bob are suggested to Lenawee Humane Society, Hospice of Lenawee or Croswell Opera House. Online condolences and memories may be shared at www.WagleyFuneralHomes.com.

The family of Robert E. "Bob" Price created this Life Tributes page to make it easy to share your memories.

Send flowers to the Price family.