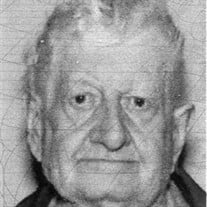 ADRIAN- Robert Anthony Lonsway, age 83 of Adrian, went to meet his Lord on Tuesday, December 03, 2019. He was born on April 21, 1936 in Jackson, Michigan, the son of Roscoe J. and Wilhelmina (Burg) Lonsway. Bob graduated from Catholic Central High School in 1954. Following graduation Bob worked for a number of years at the A & P Store in Adrian, and later had a motor route with the Detroit Free Press. His interest in genealogy spanned his adult life and a long-standing dream was fulfilled when a French-Canadian research group traced one of his lines to Charlemagne. He belonged to several genealogical societies and also had an interest in aquarium fish, orchids and cooking. Bob was a member of St. Joseph’s Catholic Church since 1952, when his family moved to Adrian from Chelsea, Michigan; he also sang in the church choir for many years. He is survived by his sister, Mary Collins of Adrian, and her eight children, Michelle Grassman, Timothy, Jeanine Peterman, Theodore, Amy Collins- Kilar, Betsy Doyle, David and Deanna and their families; great nieces and nephews, Anna, Emma, Jenny, Tracy, Mike, Josh, Cassie, Kayla, Lauren, Sara, Jeffrey, Andy, Dustin, Breanna, Emily, Nia, Elin, Ethan and Drew; great great nieces and nephews Layne, Cade, Claire, Alaina, Nick, Ruby, Iris, Cora and Calvin; and step great niece and nephews, Jacob , Josh, Courtney and Peyton. Bob was preceded in death by his parents, grandparents, Alpheus and Mary (Schiffer) Lonsway, John Louis and Mary Ann (Hare) Burg; and a niece, Pamela, who died in infancy, a little angel who was stillborn, and a great nephew, Seth Peterman. At Bob’s request, cremation has taken place. A graveside service will be held on Friday, December 27, 2019, at 10:30 a.m. at St. Joseph Cemetery, Adrian. Memorial contributions may be made to St. Vincent De Paul Society. Arrangements have been entrusted to Wagley Funeral Home, Adrian. Online condolences and memories may be shared at www.WagleyFuneralHomes.com.

The family of Robert Anthony Lonsway created this Life Tributes page to make it easy to share your memories.

Send flowers to the Lonsway family.