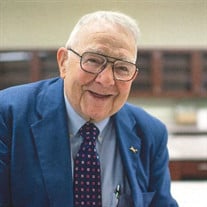 ADRIAN – Dr. Robert Wayne Husband, 90, of Adrian died Thursday morning, December 16, 2021 at Cambrian Assisted Living in Tecumseh. He was born on May 21, 1931 in Hesperia, MI to Max and Frieda (Poe) Husband. Growing up in a house with five boys and one girl, you could guarantee there was always excitement going on. Bob had a thirst for knowledge and adventure throughout his life. After graduating from high school, Bob attended the University of Michigan earning his bachelors in 1953, going on to serve his country in the United States Air Force from 1954-1958. Upon his discharge he went to Western Michigan University and earned his masters in 1960. Bob felt the pull again to serve and enlisted in the Michigan Air National Guard in 1962-1970. He finished his studies at Michigan State University where he received his PhD in Zoology in 1966. Bob spent his entire teaching career as a well-respected researcher and professor of biology at Adrian College. Bob was a world-renowned entomologist, specializing in mites. During his career he authored over 150 research publications, discovered over 172 new genera and species of mites, attended conferences and presented, not only in the U.S., but in England, Germany, Italy, Australia and Japan. Bob was most proud of starting the human anatomy class at AC that allowed students to study with cadavers, which helped advance their studies and knowledge as they prepared for the medical field. Bob was a member of the First United Methodist Church, Adrian for many years and a supporter of the Hope Center and Civitan of Lenawee. Bob wasn’t alone on his adventures, on May 14, 1955 Bob married Patricia S. Psalmonds in Kalamazoo, MI and they shared 60 years of building a family and traveling the world. Bob is survived by his children, David (Cindy), Linda Psalmonds and Suzanne Husband; grandchildren, Ted Husband, Robert Husband, Crystal (Leonidas) Fiallos and Robert (Danielle) Rowland III; great-grandchildren, Jacob, MacKenzy, Damien, Amy and Robert IV; siblings, Pat Hoyt, Michael (Abby) Husband, Keith Husband and Tim (Martha) Husband. He was preceded in death by his parents; wife, Patricia; brother, Terry; brother-in-law, John Hoyt and sister-in-law, Suzanne Husband. Funeral services for Bob will be on Wednesday, December 22, 2021 at 12 p.m. at Wagley Funeral Home, Adrian with Rev. Eric Stone officiating. The service will be live-streamed and accessible from Bob’s tribute wall for 90 days. Visitation will be from 10 a.m. until the time of the service. The family has requested masks be worn by all who attend. Memorial contributions may be made to Civitan of Lenawee or the Hope Center. Online condolences and memories may be shared at www.WagleyFuneralHomes.com.

ADRIAN &#8211; Dr. Robert Wayne Husband, 90, of Adrian died Thursday morning, December 16, 2021 at Cambrian Assisted Living in Tecumseh. He was born on May 21, 1931 in Hesperia, MI to Max and Frieda (Poe) Husband. Growing up in a house with... View Obituary & Service Information

The family of Dr. Robert Wayne Husband created this Life Tributes page to make it easy to share your memories.

Send flowers to the Husband family.