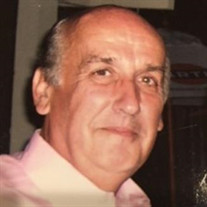 TAMPA, FL– Robert Burdette Carroll, age 66, of New Port Richey, FL, passed away at Moffitt Cancer Center in Tampa, FL on Sunday, January 22, 2017. Born April 27, 1950, in Toledo, he was the son of the late Marvin Burdette and Luella (Ford) Carroll. Robert earned his B.S. degree in finance from Northwood University. He was employed at various banks throughout his career in multiple cities throughout the United States. Robert served as Vice President at U.S. Bank until his retirement. He is survived by his brothers, Larry (Pat) Carroll of Shelby Township, MI and Donald (Kris) Carroll of Xenia, OH; brother-in-law, James Hand of Davenport, FL; aunt, Hilda Knoblauch of Blissfield, MI; nephews, Daniel (Jennifer) Carroll of Grand Haven, MI and Dennis (Jennifer) Hand of Patterson, NJ; niece, Leah (Brian) Madara of McCordsville, IN; great-niece Allison, and great-nephews, Maddox and Nathan. In addition to his parents, Robert was preceded in death by his sister Kay Hand. Cremation has taken place. A Memorial Service will be held later in the spring of 2017. The family suggests memorial contributions be made to the American Cancer Society. Arrangements have been entrusted to Wagley Funeral Home, Tagsold Chapel, Blissfield, MI where online condolences and memories may be shared at www.WagleyFuneralHomes.com

The family of Robert Burdette Carroll created this Life Tributes page to make it easy to share your memories.

Send flowers to the Carroll family.