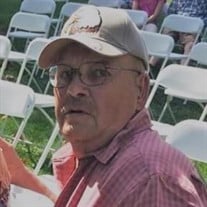 PALMYRA – Robert “Bob” Eugene Thompson, 78, of Palmyra died on Tuesday, June 8, 2021 at ProMedica Hickman Hospital. Bob was born on August 31, 1942, in Adrian, to Ernie and Maida (Rau) Thompson. Bob was one of five boys with one sister growing up in the family home. He attended Blissfield schools. On September 19, 1964 Bob married Judith “Judy” Witt and they celebrated 56 years this past fall. Bob worked at Tecumseh Products and Frostways in Detroit, before joining the team at Kuhlman Concrete; where he drove truck and retired after 23 years. In his earlier years, Bob was a volunteer with the Palmyra Fire Department. Bob was a lifelong member of St. John’s Lutheran Church in Riga. The family started a tradition in 1968, where every year they would head up to the Gaylord area and go mushroom hunting. It did not matter how many mushrooms were actually found as the laughs and memories the family created were priceless. Bob found great joy in working outside, especially in the garden or mowing the lawn. In later years, Bob and Judy were known to take a road trip and try their luck at Greektown or FireKeepers casinos. In addition to his wife, Judy, Bob is survived by his children, Dan Thompson of Palmyra, Bud (Vicki) Haggard of Maumee, OH and Marlene (Haggard) Kurisco of Pennsylvania; grandchildren, Dylan Thompson, Dustin Thompson, Rob Haggard, Quinton Haggard and Brandi Reyes; 10 great grandchildren and siblings, Jim and Dean Thompson and Mary Sawade. He was preceded in death by his parents and brothers, Roger and Duane Thompson. At Bob’s request, cremation will take place with no public services. Memorial contributions in Bob’s memory may be made to The American Lung Association. Arrangements have been entrusted to Wagley Funeral Home, Tagsold Chapel in Blissfield, where online condolences and memories may be shared at www.WagleyFuneralHomes.com.

The family of Robert "Bob" Eugene Thompson created this Life Tributes page to make it easy to share your memories.