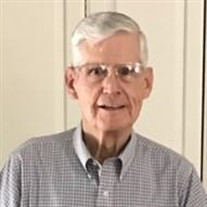 JACKSON- Robert “Bob” Marvin Richards, age 83 of Jackson, passed away on Monday, February 24, 2020, at Ganton’s Brightside Assisted Living and Memory Care with his family by his side. Bob was born on July 2, 1936, in Honolulu, Hawaii, to Alvin and Margurette (Sullivan) Richards. After high school Bob joined the United States Marines Corps and served our country for 12 years. During his time in the Marines, Bob was an expert marksman in rifle and pistol shooting. On October 6, 1957, he married the love of his life Mary Frances Humphries and they have shared 62 wonderful years together. Bob worked his way up the ladder at AT&T and finished his 40-year career as an engineer. He obtained his bachelor’s degree in information from the University of California, San Francisco. The Boy Scouts have always been a part of Bob’s life when he was younger and later on as a leader; one memorable trip included taking his troop to Valley Forge for the National Boy Scouts Jamboree. Bob was raised and lived most of his life in California, cheering on the Oakland Raiders and Athletics over the years as they held a special place in his heart. Family was important to Bob as he invested many hours in looking up his family genealogy and spending time at his grandchildren and great-grandchildren’s activities. Bob is survived by his wife, Mary; children, Scott Richards (Irene Valdez) of Jackson, Valerie (Jeff) Honer of Texas; grandchildren, Carissa Bain, Serena (Pete) VandenBussche, Megan Richards (Jeremy VanLoo), Elizabeth (Jason) Marker, Theresa (Earl) Gordon, Sean (Suzi) Richards, Heather Honer (Megan Breckman), Laurel (Stephanie) Patton and Erin Honer; great-grandchildren, Earl Gordon, Nicole Ober, Anna VandenBussche, Madison McClure, Steven Carpenter, Holly VandenBussche, Marjorie Gordon, Haven Marker, Tatum Marker, Graham Richards and Eleanor Richards; great, great-grandchildren, Hunter Gordon and Averi Ober. He was preceded in death by his parents, and siblings, Joan Richards and Alvin Thorton Richards. A celebration of Bob’s life will be on Saturday, February 29, 2020, at 11 AM at Wagley Funeral Home, Adrian with Fr. Tim McIntire. Visitation will take place from 9 AM until the time of the service at the funeral home. Bob will be laid to rest on O’ahu, Hawaii. In lieu of flowers, memorial donations may be made to the Alzheimer’s Association. Online condolences and memories may be shared at www.WagleyFuneralHomes.com.

The family of Robert "Bob" Marvin Richards created this Life Tributes page to make it easy to share your memories.

Send flowers to the Richards family.