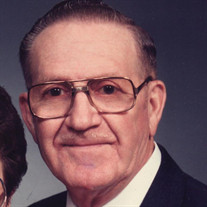 ADRIAN – Robert C. Bishop, 97 of Adrian, passed away Saturday, November 14, 2020, at Lenawee Medical Care Facility. He was born in Clyde, Ohio, August 23, 1923, to Charles and Ethel (Amsbaugh) Bishop. He proudly served in the United States Army during World War II. On November 8, 1946, he married Joyce Krouse, and she preceded him in death in 2009, after celebrating over 63 years together. Bob retired from the Adrian Fire Department with 28 years of service. Additionally, he worked as a deputy sheriff and bailiff in Lenawee County serving under four different sheriffs. He also worked as an investigator and process server for Baker Durst Marr & Nelson Law Firm. To the children in Adrian he was fondly known as the candy man sharing candy with young and old alike from his red scooter. Bob was a member of the Hudson American Legion Hannan Colvin Post #180 for over 75 years and was honored by their auxiliary for his meritorious service. He was a former member of the Elks and the Moose Lodge. He is survived by his brother Richard Bishop of Adrian, and numerous nieces, nephews, and friends. In addition to his wife he was preceded in death by brothers Hubert and Fletcher, and sisters Mildred Robinson, Margaret Eschues and Alberta Brownell. Funeral services will take place at 1 p.m., Thursday, November 19, 2020, at Wagley Funeral Home with Rev. Tom McMichael officiating. Burial will follow at Oakwood Cemetery with full military honors conducted by American Legion Hannan Colvin Post #180. Visitation will be at the funeral home Thursday from 10 a.m. until the service. Contributions in memory of Bob may be directed to American Legion Post #180 or the Adrian Fire Department. Following the Governor’s executive order, all attendees are required to wear a proper face covering, with the exception of those under the age of five years old or those who cannot medically tolerate. Online memories and condolences may be shared at www.WagleyFuneralHomes.com.

The family of Robert C. Bishop created this Life Tributes page to make it easy to share your memories.

Send flowers to the Bishop family.