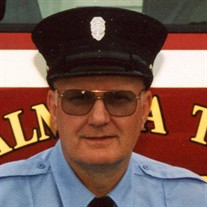 Richard Allan Jackson, 73, of Palmyra, passed away Thursday, May 3, 2018 at Hospice of Lenawee Home in Adrian. Richard “Dick” Jackson was born February 1, 1945 in Adrian, MI, to Richard E. and Margreet “Muggs” (Coleman) Jackson. A 1963 graduate of Blissfield High School, Dick proudly served his country in the United States Army, stationed in Germany during the Vietnam War. Richard wed Marjorie Baldwin on August 5, 1967, and she preceded him in death March 10, 2000. He married Mary Jo Johnson July 7, 2001, and she survives. Dick’s sense of responsibility and passion for giving back to the community were constant threads throughout his life. An EMT and volunteer fireman with the Palmyra Fire Department for over 37 years, Dick also served as a 4-H leader, Lenawee County Fair Superintendent and member of the Small Animal Board. Dick retired from GM/EDS in 1999. He owned R. A. Jackson Tax Service for over 40 years. Dick was a “fixer” and loved to help people. The greatest joys in his life were his grandchildren. His legacy is the number of lives he touched through his servant leadership. Dick is survived by his wife, Mary Jo Jackson, of Palmyra, Michigan; his father, Richard E. Jackson, also of Palmyra; his children: Jodi (Steve) Sterle, of Roland, Iowa and Jeff (Michelle) Jackson of Palmyra; step-children: Melanie (Mike) Nightingale and Melissa (Travis) Timar both of Adrian; eight grandchildren: Jake and Jackson Sterle, Daniel and Scott Jackson, Silas and Anna Brugger, and Leo and Archer Timar; and brothers Mark A. Jackson of Adrian and Doug (Glenda) Jackson of Marshall, Michigan; in-laws include LeRoy (Marilyn) Baldwin of Tonawanda, NY, Harold (Cookie) Baldwin of Adrian, Jerry (Linda) Baldwin of Adrian, Dee (Tom) Schultz of Warren, PA, Linda Gentry of Adrian, and Ric (Marty) Johnson of Lander, WY. He was preceded in death by his first wife, Marjorie, and his mother, Muggs Jackson. Funeral services will be held Saturday, May 5, 2017 at 2 p.m. with Pastor Tom Hawkins officiating and visitation on Friday from 4 to 8 p.m. and Saturday from 11 a.m. until the service at Wagley Funeral Home, Tagsold Chapel in Blissfield. Burial will follow at Palmyra Cemetery with military rites by American Legion Post #325. Memorials can be written to the Palmyra Township Fire Department or the Lenawee County 4-H Council (c/o Dick and Marge Jackson Scholarship Fund). Online condolences and memories may be shared at www.WagleyFuneralHomes.com.

The family of Richard A. Jackson created this Life Tributes page to make it easy to share your memories.

Send flowers to the Jackson family.