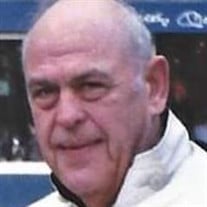 ADRIAN – Richard “Dick” Stuart Hutt, 84, of Adrian, died unexpectedly at home on Friday, January 28, 2022. He was born March 20, 1937, in Ontario, Canada to R. Stuart and Sylvia (Knoell) Hutt. Dick attended the University of Buffalo in New York. For over 50 years, Dick provided executive leadership to Primore/Sedco in Adrian, where he was still active on the Board of Directors. On June 3, 1994, Dick married Shirley McLemore and they have shared 27 adventurous years together of making memories. Dick was a true outdoorsman. Shirley and Dick would travel to Mio, MI where they had a cabin, where he would hunt and fish. They spent their winters in Venice, Florida where they loved to golf. Dick was a man of few words, but his sense of humor was evident in the stories he enjoyed telling, and oh the stories he could tell. In addition to his wife, Shirley, he is survived by his children, Suzanne (Michael) Schulte, Barbara (Scott) Phillips, Elizabeth (Dennis) Pollard, and son-in-law, John Sergent; stepchildren, Michael (Michelle) McLemore, Melinda McLemore (Dennis Swiggum), Marty (Tammie) McLemore, Matthew (Valerie) McLemore, Beebe (Mike) Reno and Kathy McLemore; 23 grandchildren and 31 great-grandchildren. Dick was preceded in death by the mother of his children, Karen Witte Hutt; daughter, Karen “Paula” Sergent and grandson, Shaun McLemore. Following Dick’s wishes, cremation will take place with all services private. In honoring Dick’s love of the outdoors, memorial contributions may be made to the National Park Foundation. All arrangements have been entrusted to Wagley Funeral Home, Adrian, where online condolences and memories may be shared at www.WagleyFuneralHomes.com.

The family of Richard Stuart Hutt created this Life Tributes page to make it easy to share your memories.

Send flowers to the Hutt family.