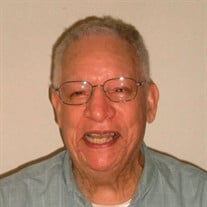 ADRIAN – Richard M. Grimes, 92, formerly of Jackson, died Saturday, December 19, 2020, at Brookdale of Adrian. He was born April 27, 1928, in Adrian, one of five children born to the union of the late Paul and Agatha (Bird) Grimes. Richard grew up in Adrian in a faith-filled home and was baptized and raised in the AME Church. He was a 1946 graduate of Adrian High School. He was a proud veteran of the United States Army, serving from 1950-1956 during the Korean War. Richard worked as a steel worker for Ervin Industries, a metal abrasive company, for 36 dedicated years until his retirement in July of 1984. He married the love of his life, Marjorie “Margie” Stewart on November 13, 1954, in Toledo, OH. She preceded him in death after 41 blissful years together on November 26, 1995. A simple man, Richard enjoyed the simple pleasures and comedy that ordinary life has to offer. He was blessed to travel much of the world; he visited every continent besides Australia. He was most enthused with his trip to the Holy Land in 2001. He loved bowling and was a pool shark. He especially cherished going up north with Margie, who loved the Upper Peninsula and would hunt side-by-side with Richard. While he was a member of Bethel AME Church, church was such a priority to him that he was known to attend anywhere if the doors were open. Surviving are a sister, Barbara Turner of Adrian; nieces, Teresa (Scott) Turner-Sharp of Adrian, Linda (Jeffrey) Pelham of Adrian, Dawn Grimes of Westland, Robyn Grimes of Ypsilanti, and Brianna Allen of Westland; nephews, Clayborne (Julie) Stewart of Leota, Harry Stewart of Adrian, and Charles “Babe” (Kay) Stewart of Adrian; and many extended nieces who loved him dearly. In addition to his parents and wife, he was preceded in death by a sister, Pauline Scott; two brothers, Nathaniel Dale Grimes and Ralph W. (Gale-living) Grimes; and a nephew, Brian Paul Turner. The family will receive friends for visitation on Tuesday, December 29, 2020, from 11:00 a.m. until 1:00 p.m. at the Wagley Funeral Home, Adrian. A funeral service will follow at 1:00 p.m. with nephew Rev. Charles Stewart officiating. Burial will follow in Oakwood Cemetery, where full military honors will be performed by the Annis-Flint Post #1584 and the American Legion Post #97 of Adrian. Following the Governor’s executive order, all attendees are required to wear a proper face covering, with the exception of those under the age of five years old or those who cannot medically tolerate. Memorial contributions in memory of Richard are suggested to Bethel AME or Hospice of Lenawee. Online memories and condolences may be shared at www.WagleyFuneralHomes.com

The family of Richard M. Grimes created this Life Tributes page to make it easy to share your memories.

Send flowers to the Grimes family.