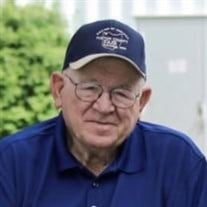 FAYETTE, OH – Richard A. “Chick” Lumbrezer, 79, of Fayette, died Wednesday evening, July 7, 2021, at CHP Inpatient Hospice in Defiance following a brief illness, with his devoted family by his side. Born at home on August 11, 1941, in Swanton, OH he was the son of Cletus and Christine (Eisel) Lumbrezer. Chick graduated from St. Mary’s High School in Assumption, OH with the Class of 1959. On July 27, 1963, Chick married Virginia “Ginger” Spenthoff at Our Lady of Lourdes in Toledo, OH. Chick was a farmer for many years before an accident caused him to change his course. He retired from Defiance Precision Products after working for 28 years. Never one to set still, Chick volunteered his time and talents as a 4-H Advisor in Fulton County for 32 years; during this time, he helped his children and other 4-H members prepare for the fair and work with their livestock. Chick started camping at the Fulton County fairgrounds and the National Threshers Convention with his family and they have shared over 50 years of laughter and memories. He was a member of St. Caspar’s Catholic Church in Wauseon, OH and belonged to the Knights of Columbus for over 50 years. He was a devoted “Papa” and never missed his grandchildren’s activities. Surviving in addition to his wife of 57 years, Ginger, are four children, Lisa (Steve) Gustwiller of Wauseon, Laurie (Larry) Naveau of Napoleon, OH, Matt Lumbrezer (Cathy Parrish) of Fayette, and Luanne Lumbrezer-Strauss of Wauseon; grandchildren, Stephanie (Kunle) Lawson, Kendra (Brian) Courtney, Caleb (Emily) Gustwiller, Kallie, Mallorie and Madison Strauss, and Natalie Lumbrezer; great-grandchildren, William Courtney, James Lawson and Jaxon Gustwiller; siblings, Ruth (Charlie) McGhee- Mika, Bill (Judi) Lumbrezer and Joan (“Boomer”) Rice. He was preceded in death by his parents; infant son, David; and brothers-in-law, William McGhee and Robert Spenthoff. The family will receive friends for visitation on Sunday, July 11, 2021, from 1-6 p.m., at St. Caspar Catholic Church Parish Life Center in Wauseon. Mass of Resurrection for the soul of Richard will be celebrated by Father Todd Dominique at St. Caspar Catholic Church on Monday, July 12, at 11:00 a.m.; with a one hour visitation prior to the start of Mass. Arrangements were entrusted to the care of Wagley Funeral Homes, Adrian, MI. Those planning an expression of sympathy may consider memorial donations in honor of Chick to CHP Hospice of Defiance, St. Caspar Catholic Church or the Fulton County 4-H Endowment Fund. Online condolences and memories may be shared at www.WagleyFuneralHomes.com.

The family of Richard "Chick" A. Lumbrezer created this Life Tributes page to make it easy to share your memories.

Send flowers to the Lumbrezer family.