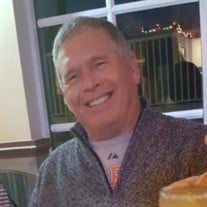 BLISSFIELD – Richard Lee Calvin, 68, passed away at his home on December 14, 2021, from complications from cancer. Richard was born on March 24, 1953, to the late Richard Lewis and Elizabeth (Silberhorn) Calvin in Adrian, Michigan. Richard graduated from Adrian High School in 1971 where he had participated in football and wrestling; and worked co-op his senior year in his brother, Jim’s, auto body shop. He married Karol Konieczny on April 14, 1973, and they had two sons, Craig and Douglas. Richard worked over 40 years between Chrysler Jeep and Kuka Toledo, retiring in March of 2015. He then went on to work part time at Woodlawn Golf Course. In addition to working at Jeep, Richard restored classic cars. Richard married Linda Montecinos on February 13, 2016, in Siesta Key, Florida. An avid golfer, Richard enjoyed his annual golfing trips to Myrtle Beach with his friends, the “dirty dozen” as they called themselves. He always made time for numerous golfing trips each year with his golf buddies. Richard enjoyed hunting and fishing with his sons, and riding his Harley, which he had rode around Lake Michigan. Richard and Linda rode his Harley through the Blue Ridge Mountains and Maine, and vacationed in Cabo San Lucas in Mexico each December. In addition to his wife, Linda, Richard is survived by his sons, Craig (Sheila) Calvin and Doug Calvin; sisters, Linda (David) Lips and Karen (Doug) Witt; grandsons, Charlie and Cooper Calvin; sisters-in-law, Vickie (Tim) Vogel, Jody Calvin and Jill Calvin; many extended family and friends; and his beloved dog, Lilly. He was preceded in death by his parents, along with his sister, Nancy (in infancy); brothers, James, Lewis, Larry and Gary; and his nephews, Matthew and Kevin Lips. Following Richard’s wishes, cremation will take place and a Celebration of Life will be held in the summer of 2022. Arrangements have been entrusted to Wagley Funeral Home, Tagsold Chapel, Blissfield. Memorial contributions may be made to Hospice of Lenawee or the Lenawee Humane Society. Online condolences and memories may be shared at www.WagleyFuneralHomes.com.

BLISSFIELD &#8211; Richard Lee Calvin, 68, passed away at his home on December 14, 2021, from complications from cancer. Richard was born on March 24, 1953, to the late Richard Lewis and Elizabeth (Silberhorn) Calvin in Adrian, Michigan. Richard... View Obituary & Service Information

The family of Richard Lee Calvin created this Life Tributes page to make it easy to share your memories.

BLISSFIELD – Richard Lee Calvin, 68, passed away at his home...

Send flowers to the Calvin family.