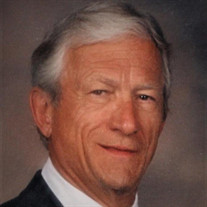 BLISSFIELD, MI - Richard Charles Burns, D.O., 91, died peacefully, from natural causes, in his home on Wednesday evening September 2, 2020. He was born in Toledo, Ohio May 14, 1929 to Frank and Marion (Dreyer) Burns. Richard was a 1947 graduate of DeVilbiss High School and attended University of Toledo, where he was a member of the Pi Kappa Alpha Fraternity. He later transferred to The Ohio State University, where he graduated with a Bachelor of Science degree in Biological Sciences. Since early childhood, he wanted to become a doctor and he pursued this goal by attending the University of Basel in Switzerland to study medicine. He later transferred to Kirksville College of Osteopathic Medicine and Surgery, now known as A.T. Stills University, in Kirksville, Missouri, where he was a member of Sigma Sigma Phi and Psi Sigma Alpha honorary fraternities while earning a Doctor of Osteopathy (D.O.) degree. In 1962, following his residency at Parkview Osteopathic Hospital in Toledo, Ohio, he started a private practice in Blissfield, Michigan. For 26 years, he took great pride in caring for his patients through his family practice and making frequent in-person house calls to patients who lived in the rural areas of Lenawee County. He also served as the campus and team physician at Adrian College and served as Chief of Staff at Bixby Medical Center in Adrian, Michigan. In 1988, he retired from his family practice in Blissfield and went on to practice behavior health medicine at Ypsilanti State Hospital in Ypsilanti, MI. He later returned to practice general medicine in the Toledo area prior to his final retirement. In 1970, Richard found his life partner, Norma Jean (Creger) Tagsold, and they were married December 14, 1971. During their forty-eight years together they enjoyed working together, spending time with close friends and family and traveling, domestic and abroad; with special memories of traveling to Spain and France with Jean’s brother and his wife, Bob and Ellie Creger. They also enjoyed special time with family every December on Captiva Island, Florida. Richard enjoyed a full and active life with many interests and hobbies. Growing-up, his favorite subjects in school were Reading and English, which led to his lifelong pursuit of knowledge. For leisure, you would often find him reading a book, a novel, or studying a special interest. He also enjoyed boating, scuba diving, flying, snow skiing, bicycling, travel and classical music. At a young age, he learned to play the piano and harmonica and he enjoyed entertaining friends and family during the holidays and special occasions. He was also a long-time member of the Civil War Roundtable in Adrian, North Cape Yacht Club and the Toledo Power Squadron. Raised in Toledo, he attended St. Mathews Lutheran Church and later became an active member of St. Paul’s Lutheran Church in Blissfield, where he taught Sunday School. Richard was an active member of the Masonic Lodge, achieving 32nd degree Scottish Rite, and a long-time member of Blissfield Rotary Club. He also participated in many Medical Missions to Latin America and he and his wife were Meals-On-Wheels volunteers for many years. Richard is survived by his children, Scott (Mary Lynn) Burns of Holland, OH and Heather Burns of Richmond, CA; step children, Doug (Diane) Tagsold of Blissfield; Linda Cantrell of Manitou Beach, MI and Jeff (Laura) Tagsold of Manitou Beach, MI; nieces Heidi (John) Mortimer of Mt. Pleasant, SC and Laura Bierer of Raleigh, NC; and nephews, Gregory (Harriett) Walker of Goose Creek, SC and David (Karin) Walker of Sylvania, OH. He is also survived by two grandchildren, four step grandchildren and two step great grandchildren. He was preceded in death by his parents, Frank and Marion Burns, his sister Barbara (Burns) Walker and his wife, Jean Burns. The family would like to express a special thank you to the caregivers from Hospice of Lenawee and Senior Helpers of Ann Arbor for their dedication in providing the personal care Richard needed and support for the family during our time of need. A funeral service for Richard will be on Wednesday, September 9, 2020, at 11:00 a.m. at St. Paul’s Lutheran Church with Pastor Joshua Rinas officiating. Burial will follow in Pleasant View Cemetery in Blissfield. The family will receive friends for visitation on Tuesday, September 8, from 6 until 8 p.m. at Wagley Funeral Home, Tagsold Chapel in Blissfield, and on Wednesday morning from 10:00 until the time of service at the church. In lieu of flowers, memorial donations may be made in Richard’s honor to benefit St. Paul’s Evangelical Lutheran Church or the Lenawee County Humane Society. Following the Governor’s executive order, all attendees are required to wear a proper face covering, with the exception of those under the age of five years old or those who cannot medically tolerate. Online memories and condolences may be shared at www.WagleyFuneralHomes.com

BLISSFIELD, MI - Richard Charles Burns, D.O., 91, died peacefully, from natural causes, in his home on Wednesday evening September 2, 2020. He was born in Toledo, Ohio May 14, 1929 to Frank and Marion (Dreyer) Burns. Richard was a 1947 graduate... View Obituary & Service Information

The family of Dr. Richard Charles Burns created this Life Tributes page to make it easy to share your memories.

Send flowers to the Burns family.