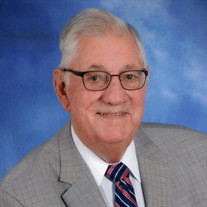 NAPLES, FL—Richard ‘Dick’ Allen Braun, 92 of Marco Island, FL, formerly of Adrian and Devils Lake, MI passed away Friday, September 15, 2017, at Discovery Village at Naples, FL. Dick was born November 17, 1924, in Tecumseh, MI to Edward M. and Ella (Routson) Braun. He was a 1943 graduate of Adrian High School. He was a veteran of WWII, serving in the Air Wing of the Marine Corp. In August, 1944, he married his high school sweetheart, Dorothy Gilbert. They were married for 65 years before she passed away in August, 2009. In 1947, Dick graduated from Cincinnati College of Mortuary Science. Dick and his brother Ed continued with their father’s funeral business, Braun Brothers Funeral Home with chapels in Adrian and Brooklyn, MI. Dick contributed to excellence in his profession and leadership in his professional associations on the district, state and national levels. He was past president of the Michigan Funeral Directors Association then proceeded onto the national level where he became President of the National Funeral Directors Association from 1989 to 1990. He held all offices in both associations. After his involvement with the professional associations he became a consultant to United Family Life Insurance Co. of Atlanta, GA. Dick believed in serving the communities he lived in. While Dick lived in Adrian, he was a member and past Commander of American Legion Post 399, Voiture Locale 40 & 8 and a life member of the D.A.V. and served on the boards of Salvation Army, YMCA, City of Adrian (Oakwood Cemetery), Hospice of Lenawee County. He was also an elder in The First Presbyterian Church of Adrian, MI; a Knights Templar; a Lenawee County Commissioner from 1976 to 1978 and was instrumental in the building of the Judicial Building in Adrian. His other memberships included AOPA, Exchange Club, Kiwanis Club, Masonic Lodge, Shrine (Zenobia Temple of Toledo, OH), Lenawee Shrine Club, F. & A.M. No. 19 Adrian, Adrian Commandry No. 4, Adrian Chapter No. 10 R.A.M. and Order of the Eastern Star. He was also a member of the Lenawee Country Club, the Elks Lodge and the Devils Lake Yacht Club. After moving to Marco Island in 1992, Dick became involved with the community and served as a Commander of Marco Island Power Squadron, member of Marco Bay Yacht Club, Marco Men’s Club, Marco Shrine Club (Araba Shriners), Marco Island Fire and Rescue Foundation, E.T. Brisson Detachment Marine Corp. League of Naples and Wesleyan Methodist Church. Along with Dick’s professional and civic interests, he enjoyed piloting his airplane while living in Michigan and boating when he moved to Florida. Dick and Dorothy enjoyed traveling and being with family and friends. Survivors include his children, Carol (John) Cordes of Rockford, MI, Keith (Sheryl) Braun of Marco Island and daughter-in-law, Stephanie Braun of Tuscaloosa, AL; grandchildren, Ryan Cordes, Emily Cordes, Cari Braun, Kip (Darla) Braun, Jessica (Jason) Cornman and Kelsey (Rob) Quinney; great grandchildren, Sloane and Henson Quinney; and special friend, Doris Kosley of Marco Island, FL. In addition to his parents, Dick was preceded in death by his wife, Dorothy; his brother, Edward; daughter, Cynthia and son, Martin. Funeral services for Dick will be at noon on Friday, September 22, 2017 at Wagley Funeral Home, Adrian. Full military rites will be conducted by the Annis-Flint Post #1584 and the American Legion Post #97 of Adrian at Oakwood Cemetery. Visitation for Dick will be from 10:30 a.m. until the service time at noon. A memorial service for Dick will be held in Marco Island, FL at a later date. In lieu of flowers, those wishing to make a donation in Richard’s memory may consider the Shriner’s Children Hospital, 2900 Rocky Point Drive, Tampa, FL, 33607 or a charity of one’s choice. Online condolences and memories may be shared at www.WagleyFuneralHome.com

The family of Richard 'Dick' Allen Braun created this Life Tributes page to make it easy to share your memories.

Send flowers to the Braun family.