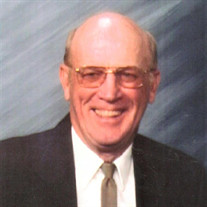 ADRIAN – Richard Gerald Bishop, age 97, of Adrian, died early Sunday morning, March 27, 2022, at his home with his family by his side while under the care of Hospice of Lenawee. He was born in Adrian on February 20, 1925, to Charles and Goldie (Amsbaugh) Bishop. Richard attended schools in both Hillsdale and Lenawee Counties before he was drafted in the United States Army in 1943. He proudly served his country during World War II in the Army Medical Corps in North Africa, China, Burma, and India. He also received special training at Maxton Army Air Force Base in North Carolina, where he flew on CG-4A Gliders for special transport carrier missions. He was honorably discharged in February of 1946. Upon returning stateside, he married Evelyn L. Ridenour from Waldron on April 9, 1950, and they enjoyed 67 years of love and memories before her passing on June 24, 2017. Together they both enjoyed hunting, fishing and traveling through the United States and Canada. Richard worked as a supervisor for the former Tecumseh Products for over 37 years before his retirement. He served on the Citizens Advisory Committee for the Tecumseh School Board for several years. He was civically engaged in Cambridge Township, serving on its board of trustees for four years, where he drafted and adopted its zoning board that he later chaired for eight years, and was chairman of the board of appeals for over 10 years. Most notably, he was a proud 76-year member of the Hudson American Legion Hannan-Colvin Post #180 and its honor guard, and was involved on the planning of its present-day building site. Surviving are two sons, Michael (Bonnie) Bishop of Onsted and Marc (Rosemary) Bishop of Manitou Beach; three grandchildren, Jamie, Jennifer, and Lee; and three great-grandchildren, Kylee, Robbie and Dustin. He was preceded in death by his parents; his wife, Evelyn; his three brothers, Hubert, Robert, and Fletcher; and his three sisters, Margaret, June, and Alberta. A funeral service for Richard will be held on Friday, April 1, 2022, at 1:00 p.m. at the Wagley Funeral Home, Adrian with Pastor Tom McMichael officiating. Burial will follow in Lenawee Hills Memorial Park in Adrian with military rites conducted by the Hudson American Legion Post #180. Visitation will be held on Thursday from 1-3 and 5-7 p.m., as well as on Friday, from Noon until the service begins. Memorial donations in honor of Richard are suggested to benefit Hospice of Lenawee. Online condolences and memories may be shared at www.WagleyFuneralHomes.com.

ADRIAN &#8211; Richard Gerald Bishop, age 97, of Adrian, died early Sunday morning, March 27, 2022, at his home with his family by his side while under the care of Hospice of Lenawee. He was born in Adrian on February 20, 1925, to Charles and... View Obituary & Service Information

The family of Richard Gerald Bishop created this Life Tributes page to make it easy to share your memories.

Send flowers to the Bishop family.