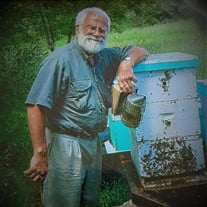 BROOKLYN – “Oh! I have slipped the surly bonds of Earth…and touched the face of God.” Raymond L. Kussmaul, Jr., 78, of Brooklyn, formerly of Clinton, died of Parkinson’s Disease Sunday afternoon, September 6, 2020, at Tecumseh Place, where he had been a resident for nearly three months. He was born February 18, 1942, in DeWitt, MI to the late Raymond, Sr. and Dorothy Mae (Thorne) Kussmaul. Ray graduated from Adrian High School in 1960; a proud member of the first graduating class. He began working for Tecumseh Products prior to his career with Ford Motor Company. Ray earned his Associate’s Degree while working for Ford. He retired after 33 years with Ford as a Hydraulic Machine Repairman. Ray also found true joy in commercial beekeeping, and as a private pilot. On April 22, 1962, Ray married Sharon Wood at the Adrian United Methodist Church. She survives to cherish over 58 years of marriage. Ray was a member of the Clinton and Adrian United Methodist Churches. He was a member of the Clinton zoning board for 10 years, as well as a member of the AOPA, EAA, and the American and Michigan Beekeeping Associations. In his spare time, he found his calling as a “vanishing pioneer.” He enjoyed cutting woods, mowing, and clearing brush and land. He loved all things that fly – honeybees, birds, and aircraft. As a commercial beekeeper, he was district representative for over 25 years. Ray learned to fly in 1965. His passion for flight took him all over the world in adventures including to the Bahamas; and an unforgettable expedition to the North Pole in the 1970s. In addition to his loving wife, Sharon, Ray is survived by his children, Richard Ray (Patrice Ann) Kussmaul of Clinton, David Lee Kussmaul of Edmonton, KY, Kendra Joy (Brian) Roell of Marquette, MI, and Pamela Wren (Victoria) Mata of Milwaukee, WI; three grandchildren Jayce Richard Kussmaul, Zachary Michael Roell, and Emma Ray Ann Mata; sister, Carol Jean Burnette; brother, John Earl Kussmaul; several nieces and nephews; and his “fur person,” Piper the cat. Ray was preceded in death by his parents; son, Michael Sean Kussmaul; daughter in infancy, Kerry Lynn Kussmaul; and brother, Larry Edward Kussmaul. A private family service will be planned to celebrate Ray’s life. Wagley Funeral Home, Adrian has been entrusted with arrangements. The family suggests that memorial contributions to honor Ray’s life be made to Tecumseh Place or Careline Hospice. Online memories and condolences may be shared at www.WagleyFuneralHomes.com.

The family of Raymond L. Kussmaul Jr. created this Life Tributes page to make it easy to share your memories.

BROOKLYN – “Oh! I have slipped the surly bonds of Earth…and touched...

Send flowers to the Kussmaul family.