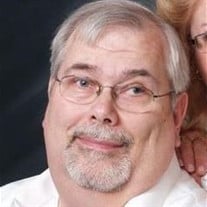 ADRIAN- Ralph Edward DuMont age 66, of Adrian, passed away on Thursday May 23, 2019 at the Hospice of Lenawee Home. He was born on February 20, 1953, in Lakewood, Ohio, to Ralph and Emma (Potter) DuMont. He earned his Associate’s Degree from Siena Heights University. Ralph married Patricia (Vanek) DuMont April 2, 2005 in Adrian, and she survives. Ralph worked for the State of Michigan in the Department of Environmental Quality, retiring after 37 years. He was a lifetime member of the NRA. Ralph enjoyed photography and birds were his favorite creatures to capture on film. He took it upon himself to make sure the various wildlife around his home were fed year round, and this included birds, raccoons, chipmunks, squirrels, and deer. Ralph was a gentle giant and very protective of his family. Red, white and blue ran deep in Ralph’s veins and the love of his country was always in his actions and words. In addition to Pat, his wife of 14 years, he is survived by his children: James (Angela) Vanek, David (Shannon) DuMont, Laura DuMont, Katarina DuMont and her fiance Nicholas Sears; siblings, Robert DuMont and Mary DuMont Brower; five grandchildren and his best friend, “Uncle” Lou Graham. He was preceded in death by his parents and second wife, Jodi Rousseau Dumont. Memorial Service for Ralph will be on Wednesday, May 29, 2019, at 6 p.m. at Wagley Funeral Home. Visitation will be from 4 p.m. until the time of the service at the funeral home. Memorial contributions may be made to Hospice of Lenawee in Ralph’s honor. Online condolences and memories may be shared at www.wagleyfuneralhomes.com.

ADRIAN- Ralph Edward DuMont age 66, of Adrian, passed away on Thursday May 23, 2019 at the Hospice of Lenawee Home. He was born on February 20, 1953, in Lakewood, Ohio, to Ralph and Emma (Potter) DuMont. He earned his Associate&#8217;s Degree... View Obituary & Service Information

The family of Ralph Edward DuMont created this Life Tributes page to make it easy to share your memories.

ADRIAN- Ralph Edward DuMont age 66, of Adrian, passed away on...

Send flowers to the DuMont family.