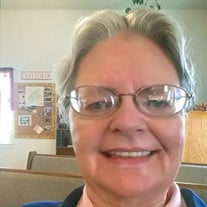 ADRIAN – Phyllis R. Watters, age 72 of Adrian, passed away September 17, 2018 at Toledo Hospital. She was born August 25, 1946, in Morenci to Raymond and Viola (Double) Shipman. On June 14, 1963, she married Paul Watters, and they have been blessed with 55 years of marriage. Phyllis attended Blissfield Bible Holiness Church. She was a loving wife, mother, grandmother and sister who will be greatly missed by her family including her husband, Paul; their sons: James (Sharalyn), Randy (Shelly), Timothy (Esther), Nathan, Philip (Victoria), Anthony and Robert (Stacie) and daughter, Robin (Chris) Gandee; siblings: Doris Wohlgamuth, Charlotte (Leonard) Worrick, Barbara (William) Rawlings, Gary (Sherri) Shipman and Roger (Annette) Shipman; 25 grandchildren and 18 great grandchildren with another on the way. In addition to her parents, she was preceded in death by brothers, Jerry, Paul and Larry, and a sister, Marie Strong. Funeral services will take place at 11a.m., Friday, September 21, 2018 at Wagley Funeral Home with Pastor Timothy Watters and Pastor Marvin Shipman officiating. Visitation will be held at the funeral home Thursday from 2 to 8 p.m., and again Friday from 10 to 11 a.m. Contributions in memory of Phyllis are suggested to her family. Online condolences and memories may be shared at www.WagleyFuneralHomes.com.

The family of Phyllis R. Watters created this Life Tributes page to make it easy to share your memories.

Send flowers to the Watters family.