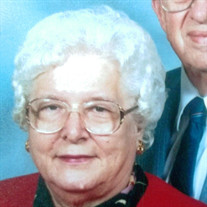 ADRIAN – Phyllis M. Stange, age 87 of Adrian, passed away Friday, April 6, 2018, at the Hospice of Lenawee Home. She was born May 1, 1930, in Holloway, Michigan, the youngest daughter of August and Augusta (Bruhn) Fischer. On May 8, 1948, she married Eugene R. Stange in Blissfield, and they celebrated 56 years of marriage before his death in 2005. Phyllis was a devoted wife, mother and grandmother who loved being with her family and friends. She was a great cook, baker and card player. Phyllis was a member of St. Paul’s Lutheran Church in Blissfield and also a member of the Stitch and Chatter Club for many years. She is survived by her two sons, Rodney (Susan) and Kevin (Wendy); grandchildren: Heather (David), Debra (Josh) Cole, Hollie (Kevin), Raymond (Amber), James, Benjamin (Jessica), Lucas (Chandra), Calvin (Destiny) Hicks, Keith (Destynee) Leland, and Nicole Donahee; great grandchildren: Payton, Gaige, Lexie, Kelsie, Trent, Kyan, Raenah, Everett, Kennedy, Emmett and Olivia. In addition to her parents and husband, she was preceded in death by a son, Larry, in infancy, and her sisters, Elnora Kendall and Mildred Bruce. Funeral services will take place at 11 a.m., Monday, April 9, 2018, at Wagley Funeral Home in Adrian with Rev. Gary Leking officiating. Burial will follow at Palmyra Cemetery. Visitation will be held at the funeral home Sunday from 1 to 7 p.m. Contributions in memory of Phyllis are suggested to Hospice of Lenawee. Online condolences and memories may be shared at www.WagleyFuneralHomes.com.

The family of Phyllis Mae Stange created this Life Tributes page to make it easy to share your memories.

Send flowers to the Stange family.