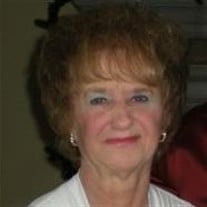 Fort Gratiot—Phyllis K. Sebring, 76, of Diamondale, MI, formerly of Adrian, MI, passed away Tuesday, August 1, 2017 at Blue Water Lodge under the care of Heartland Hospice. Born on October 24, 1940 in Adrian, MI, she was the daughter of the late Frank and Auldene (Cone) Tracy. Phyllis graduated from Madison High School in 1959. She married Richard (Al) Sebring in March, 1960. He preceded her in death in April of 1990. Phyllis worked as manager in the clothing business for 25 years, most recent with Fashion Bug Stores. She was also a former member of the Christ the Redmeer Church, Adrian. She enjoyed doing activities with her family, playing cards with family and friends, good old fashion conversations on the porch. Survivors include her children, Randy and Alice Sebring of Cadillac, MI, Rick and Cindy of Fort Gratiot, MI and Angie and Frank Salvati of Coral Springs, FL; seven grandchildren, Amie, Hanna, Josh, Jake, Cam, Trav and Casey and her sister Sharon; several cousins, nieces and nephews. In addition to her husband, Richard (Al), she was preceded in death by her parents; grandparents and two brothers Thomas and Frank Tracy. Memorial services for Phyllis will be 11 AM, Monday, August 7, 2017 at Wagley Funeral Home, Adrian, MI, with Rev. Larry Betz officiating. Burial will be private at Zion Cemetery. Visitation will be on Sunday, August 6, 2017 from 2 to 5 PM at the Wagley Funeral Home, Adrian. Online condolences and memories may be shared at www.WagleyFuneralHome.com.

Fort Gratiot&#8212;Phyllis K. Sebring, 76, of Diamondale, MI, formerly of Adrian, MI, passed away Tuesday, August 1, 2017 at Blue Water Lodge under the care of Heartland Hospice. Born on October 24, 1940 in Adrian, MI, she was the daughter... View Obituary & Service Information

The family of Phyllis Kay Sebring created this Life Tributes page to make it easy to share your memories.

Send flowers to the Sebring family.