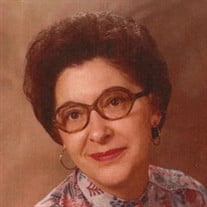 ALTO, MI- Phyllis Riley Creps went home to be with the Lord on August 31, 2020. She was 91 years old. Two days before her 91st birthday on August 3, 2020, Phyllis fell, fracturing her arm and hip. Immediately, all of her sons and all of her grandchildren traveled to Michigan from across the country to be with her. What transpired was an overflowing of love, caring and celebration. It was also a testament that one who loved so well was so well-loved. Phyllis was born Phyllis Madolyn Riley in Williamsburg, Pennsylvania, the youngest child of Frank and Elizabeth Riley on August 3, 1929. She attended Williamsburg High School, graduating valedictorian of the class of 1947. She married James Richards Creps in 1953. The two had three children, Chad Burtless-Creps, Clay Creps and James Creps. Phyllis moved to Adrian, Michigan in 1963, where she raised her sons on her own, and where she lived until May 2020 when she moved to Grand Rapids, Michigan to live with Chad and his wife Becky. Phyllis held positions at Adrian College, Bixby Hospital and Michigan Milk Producers during the course of her working life. Phyllis was a devoted mother and doting grandmother, in which role she was known as “Grammy.” Her freely given love and selflessness, her humility and strong faith, inspired her children and grandchildren. One of her grandchildren wrote these words shortly after her passing: It’s a weird pain when you lose someone you love; the ache of missing that person, yet the joy of knowing they are face to face with the Lord. 2 days before her 91st birthday my sweet Grammy fell and broke her hip and shoulder. What transpired from that accident is a true testament of God’s goodness…for a week we got to laugh, cry, celebrate 91 years, look through old photos, hold each other’s hands, and spend time with the woman who made our family who we are. I wish I could stand in front of an auditorium of people and talk for hours about the greatness that was my sweet, sweet Grammy, how she raised 3 amazing boys on her own, how she rose above the odds, and how she humbly served others. Grammy lived well, and she loved well. And she gave us the greatest gift of family. Today my sweet Grammy met Jesus – I wish I could have seen that embrace. When asked by one of her sons how she had managed to raise three boys by herself to be successful adults, she responded simply, “I just loved you.” That sums up Phyllis, Mom and Grammy – she just loved, carrying out Jesus’ charge to love one another – and in so doing, she was well-loved by her family and friends. Phyllis was preceded in death by her mother and father, her brothers Francis Riley and Franklin Riley, her sisters Jean Frye and Kathryn Riley, and her granddaughter, Sarah Burtless-Creps. She is survived by her sister Doris McNerlin, of Williamsburg, Pennsylvania; her sons Chad Burtless-Creps and his wife Becky of Grand Rapids, Michigan, Clay Creps of Portland, Oregon, and Jamie Creps and his wife Sandy of Boston, Massachusetts. She is also survived by her grandchildren, Phoebe (Josh) Oberski, Matthew and Sean Burtless-Creps; James and Riley Creps; and Madeline, Peter and Grace Creps. A memorial service for Phyllis will be held Wednesday, October 7, 2020 at the Adrian First Presbyterian Church with Rev. Ann Marie Montgomery, officiating. Wagley Funeral Home, Adrian has been entrusted with arrangements; where memories and online condolences may be shared at www.wagleyfuneralhomes.com.

ALTO, MI- Phyllis Riley Creps went home to be with the Lord on August 31, 2020. She was 91 years old. Two days before her 91st birthday on August 3, 2020, Phyllis fell, fracturing her arm and hip. Immediately, all of her sons and all of her... View Obituary & Service Information

The family of Phyllis Riley Creps created this Life Tributes page to make it easy to share your memories.

ALTO, MI- Phyllis Riley Creps went home to be with the Lord on...

Send flowers to the Creps family.