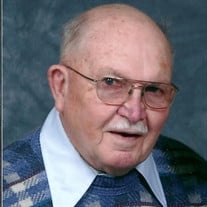 BLISSFIELD- Philip Edward Hottenstein, age 85, passed away peacefully on Monday, November 1, 2021 at Brookdale Assisted Living, Adrian. Phil was born to Frank and Fredericka (Schliemann) Hottenstein on December 24, 1935 in Dundee, Michigan. On August 12, 1961 he married Barbara Shourds in Adrian, Michigan. Phil will be remembered for never meeting a stranger, and he definitely had the gift for gab. In his youth he belonged to the boy scouts and 4-H. He and his brother Jim were one of the pioneers that started bringing cattle in from other areas to show at the Lenawee County Fair. Phil was kind of a motorhead in the 50’s, participating in street drag racing. It was during racing that Phil met Barb; racing against her brother, Norm. He was employed at Kreger’s in Adrian, then Burwitz Billington Ford for several years, until the business sold. He then found employment at Blissfield Gulf, which later became Blissfield BP. Not wanting to give up his social life, Phil stayed with Gary Bettis for over 40 years, retiring at the age of 85 when cancer dictated that he stay at home and rest. Phil enjoyed pheasant and deer hunting with family and friends, going on annual hunting trips up north. He was also an avid gun collector and later became a mega toy tractor collector. He and his close friend, Kevin Loveland, went to many toy shows, Shipshewana and even attended tractor pulls in Bowling Green, Ohio. He will be missed by all who knew and loved him. Phil is survived by his wife of 60 years, Barbara; his daughters, Pamela (Fred) Glutsch, Vicki (Kevin) Ruettinger and Julia (Doug) Spiegel; grandchildren, Carrie (Doyle) Sharp, Travis Glutsch, Jennifer Van Etten and Ashley Van Etten, four great-grandchildren; and many nieces and nephews. He was preceded in death by his parents and brother, James. Family and friends will gather for visitation on Friday, November 5, 2021 from 10 a.m. to 12 p.m. at Wagley Funeral Home, Tagsold Chapel in Blissfield. Funeral services will begin at noon with Rev. Aden Porter officiating. Private burial will follow at Maple Shade Cemetery in Onsted. Memorial contributions may be made to Hospice of Lenawee or the Heritage Farmer’s Tractor Club of Blissfield. Online condolences and memories may be shared at www.WagleyFuneralHomes.com

The family of Philip Edward Hottenstein created this Life Tributes page to make it easy to share your memories.

Send flowers to the Hottenstein family.