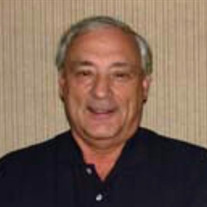 ADRIAN – Peter Hickman passed away on February 8, 2021 at the Charles and Virginia Hickman Hospital. He was 82. The eldest of six boys, Peter was born in Detroit on June 5, 1938, to Charles and Virginia Hickman. He attended Adrian High School and graduated from the University of Michigan in 1961 with a degree in Aeronautical and Astronautical Engineering. That same year, Peter married his high school sweetheart, Mary Lou (Cruikshank) and entered active duty in the United States Air Force, graduating first in his Pilot Training class at Reese Air Force Base in Lubbock, Texas. After leaving the Air Force in 1965, Peter worked as a Senior Experimental Engineer at Hamilton Standard, designing titanium propeller blades for experimental aircraft. Peter and Mary Lou returned to Adrian and he took the position of Vice President of Engineering and Chief Technical Officer at Brazeway. Peter left Brazeway in 1983 to start a computer consulting company, which later became Blue Sky Productions, Inc., a production company which provided programming for PBS and the Speed Channel. Peter was a technology enthusiast and was always ahead of the curve. He also enjoyed golfing, sailing, and he was a very skilled photographer. Peter was preceded in death by his parents and nephew, Scott. He is survived by Mary Lou, his wife of 60 years; his children, Christopher (Jennifer) of Maplewood, NJ, and Lisa Hickman (Chris Oxley) of Traverse City; grandchildren, Zachary, Sophie, Charlie and Silas; his five brothers, David (Shelley), Steve (Sally), Mark (Christine), Ross (Janet) and Alan (Cindy); brother-in-law, Jack Cruikshank (Leslie); and many nieces and nephews. Peter was a quiet, humble guy with a huge heart and a great sense of humor. He was well liked by everyone he encountered, and he will be profoundly missed. The Hickman family would like to thank the ICU doctors and nursing staff of the Hickman Hospital for their excellent care, compassion, and expertise. A private memorial will be planned at a future date. Memorial Contributions can be made to Hospice of Lenawee and the Croswell Opera House. Arrangements were entrusted to the care of Wagley Funeral Home, Adrian, where online condolences and memories may be shared at www.WagleyFuneralHomes.com.

The family of Peter Kent Hickman created this Life Tributes page to make it easy to share your memories.

Send flowers to the Hickman family.