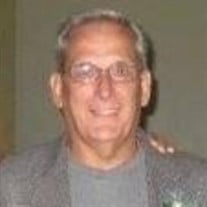 BRITTON — Peter Leon Ambs, Jr., 81, of Britton, died Wednesday morning, February 26, 2020 at his home surrounded by his family, under the compassionate care of Hospice of Lenawee. Born February 13, 1939 in Albion, MI, he was the son of the late Peter Leon and Ina Beth (Howard) Ambs, Sr. Peter was a 1959 graduate of Jackson High School. He went to receive many years of marketing training and was employed as Manager for several local businesses. Peter was Manager for the IGA in Blissfield for many years. He retired as Manager from Aco Hardware. He held many leadership positions throughout his lifetime and was kind to everyone. His employees remarked as to how much they liked to be a part of his team. On February 19, 1963 Peter married Mary Clark in Jackson. They recently celebrated 57 years of marriage. In his free time, Peter enjoyed bowling, woodworking, and lawn care. He built many things including tables and chairs. He loved to be working outdoors in his yard. Surviving in addition to his wife, Mary, are his children, Peter L. (Debbie) Ambs, III of Albuquerque, NM and Suzanne Mary (Wes) Exelby of Britton; five grandchildren; and two great-grandchildren. Peter was preceded in death by his parents; his son, Frederick Paul Ambs; and sister, Doris Morris. A celebration of Peter’s life will be held Sunday, July 18, 2021, from 2-5 p.m. at the Ridgeway Township Hall, 103 W. Chicago Blvd, Britton, MI. Memorial contributions to honor Peter are suggested to Hospice of Lenawee. Online memories and condolences may be shared at www.WagleyFuneralHome.com.

BRITTON &#8212; Peter Leon Ambs, Jr., 81, of Britton, died Wednesday morning, February 26, 2020 at his home surrounded by his family, under the compassionate care of Hospice of Lenawee. Born February 13, 1939 in Albion, MI, he was the son of... View Obituary & Service Information

The family of Peter Leon Ambs Jr. created this Life Tributes page to make it easy to share your memories.

Send flowers to the Ambs family.