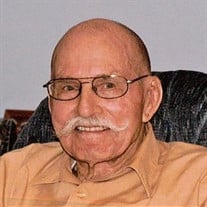 ADRIAN—Perry “Mr. Bones” R. Cisco, 97 of Adrian, passed away at Provincial House, Adrian on Saturday, February 17, 2018. Perry was born to Perry A. and Florence (Moore) Cisco on October 20, 1920 in Hudson, MI. He married Mary Eugenia Chapin, in November, 1938 in Angola, IN. They were blessed with 73 years of marriage until her death in 2012. Perry worked as a finishing carpenter for 25 years, retiring in 1982. He also enjoyed farming. Perry was one of a kind and very talented, he actually published three books. He was known as Mr. Bones because he rattled ebony wood, shaped as bones, to entertain people, especially at nursing homes and country gatherings. After his retirement, Perry would transport older citizens to their appointments. Perry and his wife, Mary, traveled to the Holy Lands; he also attended Jasper Bible Church. He will be missed by family and friends for his quick wit and charm. Survivors include his nephews and nieces, Nick (Kay) Terry, Ned (Sandra) Cisco, Mark (Donna) Cisco, John “Bill” (Patricia) Cisco, Dixie (Terry) Buter, Connie Lord and Amy Cisco; and many great nieces and nephews, including his great niece, Shelley Judkins, who was Perry’s special care taker. He was preceded in death by his son, Daniel; his siblings, Juanita Terry, John Cisco, Henry Cisco and nephews, Robert and Jim Cisco. Perry’s family would like to say a special thank you to Sheila Ault, Dorothy Thompson and the Hospice of Lenawee Staff, the Department on Aging Staff, the Staff at Promedica Provincial House and Pat and Mike Anderson for the years of care provided to Perry. According to Perry’s wishes, his body will be donated to University of Michigan Medical School. Memorial services for Perry will be at 11 am, Saturday, February 24, 2018, at Jasper Bible Church with Rev. Bruce Jewett officiating. Visitation will be one hour prior to the service at the church. Memorial contributions can be made to Hospice of Lenawee or Jasper Bible Church. Envelopes will be available at the church. Arrangements are entrusted to Wagley Funeral Home, Adrian where online condolences and memories may be shared at www.WagleyFuneralHome.com.

The family of Perry Richard Cisco created this Life Tributes page to make it easy to share your memories.

Send flowers to the Cisco family.