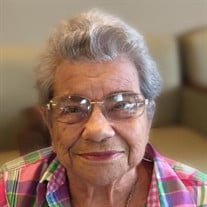 ADRIAN – Pearl Aileen (Westgate) Johns-Loar, 84, of Palmyra, Mich., passed away Wednesday, November 29, 2017. She was born on May 9, 1933, to Charlotte (Starkey) and Ralph Westgate in Adrian, Mich. Pearl married Cassius Johns on June 10, 1950. Together they had five children, Sharlene (Joś́e) Baez of Palmyra, Mich., Danny (Denise) Johns of Adrian, Mich., Roger (Jenni) Johns of Toledo, Ohio, Karen (Thomas) Miley of Holland, Ohio, and David (Toni) Johns of Grayling, Mich. In addition to their children, the family grew to 18 grandchildren, 44 great grandchildren, and 2 great great grandchildren. Cassius preceded her in death on August 18, 1988. Pearl married Howard Loar on November 5, 2000, and with this marriage, her family grew with additional step-children, step-grandchildren and step-great grandchildren. Howard preceded her in death on January 26, 2013. Pearl was a 1951 graduate of Adrian High School. She was an employee for several years at the Adrian Training School for Girls, and worked as an Adrian Public Schools bus driver until her retirement in 1989. Pearl was an avid Detroit Tigers fan, enjoyed wintering in Florida, spending time in northern Michigan, and playing cards and dominos with family and friends. She was a member of the Raisin Center Friends Church. She was also preceded in death by her granddaughter, Kari Ann Johns, and her brother, William Westgate. She is survived by her sister, Marian Keller of Blissfield, brothers, Charles (Mary) Westgate of Salona Beach, Calif., and Robert (Sandra) Westgate of Jewel, Kan., and sister-in-law, Ruth Westgate of Onsted. Visitation will be Sunday, December 3, 2017 at Wagley Funeral Home, Adrian from 1:00 p.m. to 6:00 p.m., and again Monday from 10:00 a.m. to 11:00 a.m. Funeral services will begin at 11:00 a.m., Monday, December 4, 2017, with Rev. Eric Love officiating. Burial will follow at Holloway Cemetery. Memorial contributions may be made to Raisin Center Friends Church. Online condolences are welcomed at www.WagleyFuneralHomes.com.

The family of Pearl A. Johns-Loar created this Life Tributes page to make it easy to share your memories.

Send flowers to the Johns-Loar family.