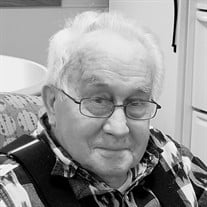 FAYETTE, OH – Paul Frederick Stockburger, 91, of Fayette, died early Tuesday morning, May 11, 2021, at Fairlawn Haven in Archbold, OH. He was born December 7, 1929, in Fayette, to Carl and Anna (King) Stockburger. He married Carol Lydia Merillat on June 15, 1957, at the Fayette Church of the Nazarene, and she survives. Paul was a 1948 graduate of Gorham Fayette High School and a lifelong resident of Fayette. Throughout his working career he farmed and was also self-employed as a semi-truck driver for his former business, Stockburger Trucking. In his retirement, he worked nearly fifteen years as a maintenance man and groundskeeper at 4H Camp Palmer in Fayette. He was a faithful member of the Solid Rock Community Church in West Unity, where he was an avid supporter of its missionaries. Paul and Carol also selflessly opened their home to nurture several foster children for almost 10 years. Surviving in addition to his wife of over 63 years, Carol, are their children, Connie Lester of Angola, IN, Fred (Dawn) Stockburger of Fayette, and Teresa (Mike) Knisely of Sylvania, OH; two sisters, Betty Weaver of Fayette, and Barb Croninger of Archbold; nine grandchildren, Zach (Lauren), Merinda (Jake), Alissa, Hilary (Austin), Parker (Destiny), Cady, Erica, Josh (Katelyn), and Mac; and nine great-grandchildren, Owen, Emersyn, Lydia, Layn, Kohlton, Mikey, Izzy, Evelyn and Jace. He was preceded in death by his parents and two brothers-in-law, Wayne Weaver and Marlin Croninger. A funeral service for Paul will be held on Saturday, May 15, 2021, at 2:00 p.m. at the Solid Rock Community Church in West Unity with Pastor Randy Evers officiating. Private family burial will follow in the Pleasant View Union Cemetery in Fayette. The family will receive friends for a visitation at the church on Saturday from 11:00 a.m. until the service. Arrangements were entrusted to the care of Wagley Funeral Homes, Adrian, MI. Those planning an expression of sympathy may consider memorial donations in honor of Paul to the Solid Rock Community Church Missionary Fund. Online memories and condolences may be shared at www.WagleyFuneralHomes.com.

The family of Paul Frederick Stockburger created this Life Tributes page to make it easy to share your memories.

Send flowers to the Stockburger family.