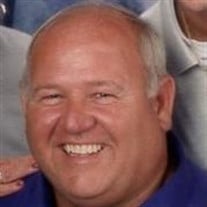 ADRIAN—Paul A. Purnell, age 72 of Adrian, passed away Thursday, March 30, 2017 at Bixby ProMedica Medical Center, Adrian. Paul was born on March 24, 1945 in White Pigeon, MI. to Milton and Selema (Wachner) Purnell. He graduated with the Adrian High School Class of 1965. After graduation, he proudly served his country in the Army from 1965- 1967. On October 11, 1968, Paul married Nancy Near at St. Mary’s Church, Adrian; they celebrated 48 years of marriage. Paul retired from Ford Motor Company, Rawsonville, where he worked for 30 years. He enjoyed traveling around the state visiting casinos, and fishing. He treasured family time and taking trips to the Upper Peninsula. Paul kept track of the local high school sports teams as well as Siena and Adrian College teams. He was an avid Philadelphia Eagle fan. In addition to his wife, Nancy, he is survived by his son, Andrew (Lisa) Purnell of Sanford, FL; grandchildren, Hannah and Landon Purnell; brother, John (Barb) Purnell of Brookfield, WI; brothers-in-law, Jim (Jayne) Near and Bob (Lynn) Near; sister-in-law, Susan (Hank) Adkins; niece, Kathy (Rob) Conklin; and many nieces and nephews. He was preceded in death by his parents and siblings, Selene ‘Sally’ Braun, Yolanda DeMolen, Lloyd, Sam and Clovis Purnell. A Celebration of Life for Paul will be scheduled for later this summer and put in the paper. Online condolences and memories may be shared at www.WagleyFuneralHome.com

The family of Paul A. Purnell created this Life Tributes page to make it easy to share your memories.

ADRIAN—Paul A. Purnell, age 72 of Adrian, passed away Thursday,...

Send flowers to the Purnell family.