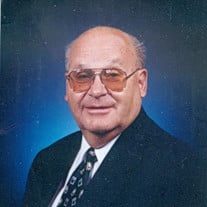 ADRIAN- Paul H. LeVeck, age 89 of Adrian, passed away on Tuesday, June 18, 2019, at Charlotte Stephenson Manor with his daughter by his side. Born on September 25, 1929, Paul was the son of Howard and Edith (Dress) LeVeck of Samaria, MI. He graduated from Adrian High School in 1949. Paul started working as a stock boy in 1945 at McClellan Dime Store and moved on to Assistant Store Manager before he was called into service. Paul was a veteran of the Korean War, serving two years with the United States Army from 1951 to 1953. On August 21, 1954, Paul married Barbara J. Brown in Adrian. Barbara’s life was way too short as she passed away on July 28, 1981, at the young age of 47. Paul was a member of the American Legion Post #97 and of the Moose Lodge #1034. He enjoyed golf, bowling and fishing with family. Paul was loved by his family and will be missed immensely. Paul retired from McCrory’s in 1991 after 46 years of dedicated service. He managed 8 different stores and was District Manager in the Boston District before he returned to the home office as a buyer for health, beauty aids and cosmetics. Paul was responsible as one of the main buyers for over a thousand stores and held this positon for the last 14 years before his retirement. Not one to sit around, Paul went back to work part time at Wagley Funeral Home from 1995 to 2004. Survivors include his daughter, Karen (Robert) Mannion; grandchildren, Jill Rupley and, Robert Mannion; great-grandchildren, Grayson Rupley and Oliver Mannion; siblings, Shirley McCarty and Myron LeVeck and several, cousins, nieces and nephews. He was preceded in death by his parents, wife, Barbara; siblings, Robert, James and Carol Bender; nephew, Steve LeVeck , and his companion Dena McClain. Funeral service for Paul will be on Friday, June 21, 2019, at 11 a.m. at Wagley Funeral Home with Rev. Larry Betz officiating. Visitation will be on Thursday, June 20, 2019, from 2 -4 and 6-8 p.m. at the funeral home. Burial will take place at Lenawee Hills Memorial Park with military honors being conducted by Annis-Fint Post #1584 and the American Legion #97 of Adrian. Contributions may be made to the American Cancer Society, Hospice of Lenawee or the American Heart Association. Online condolences and memories may be shared at www.WagleyFuneralHomes.com.

ADRIAN- Paul H. LeVeck, age 89 of Adrian, passed away on Tuesday, June 18, 2019, at Charlotte Stephenson Manor with his daughter by his side. Born on September 25, 1929, Paul was the son of Howard and Edith (Dress) LeVeck of Samaria, MI. He... View Obituary & Service Information

The family of Paul H. LeVeck created this Life Tributes page to make it easy to share your memories.

Send flowers to the LeVeck family.