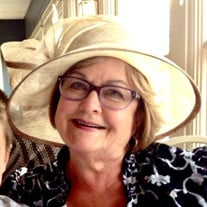 ADDISON- Patti Jean Casteel, age 72, of Devils Lake in Addison, MI, and a resident at the Jacqueline House Assisted Living in Cement City, MI passed away on November 4, 2019 surrounded by her loving family. Patti was born on March 19, 1947 to Paul and Jean (Wonder) Abbett. She graduated from Adrian High School in 1965. She went on to Eastern Michigan University where she earned both a Bachelor’s and Master’s degree in English Literature, graduating with honors. Patti married her high school sweetheart, Charles (Pete) Casteel, on February 7, 1970 and they have shared many adventures in their nearly 50 years of marriage. She was a lifelong learner and attended Siena Heights University majoring in Art and earning her teaching certificate. She was an instructor for Wayne County Community College, and later became an English and Social Studies teacher at Sand Creek Community Schools. Painting was her passion and she was also a talented musician. She taught piano lessons out of the home for many years. She was an accomplished writer and poet, who lived her life boldly and with purpose. In 2008, Patti was called to join the Catholic faith and attended St. Mary’s on the Lake Catholic Church. Patti is survived by her husband, Charles (Pete) Casteel; daughter, Dana (William) Kruse of Brighton, MI, and grandchildren Maxwell(15) and Madeline(12); daughter Jill (Jon) Mason of Jackson, MI, and grandchildren Andrew(15), Lily (13) and Maya (10); sister, Janet (Ken) Brown of Adrian MI; niece, Wendy (Trevor) Bender of Elkhart, IN; and the Rink and Falberg family cousins. She was preceded in death by her parents. Visitation will be held from 10 a.m. to 12 p.m. on Friday, November 15, 2019 at Wagley Funeral Home, 1501 W Maumee Street in Adrian, MI. A memorial service will take place at 12 p.m. at the funeral home. Memorial contributions may be made to the Alzheimer’s Association or the American Society for the Prevention of Cruelty to Animals (ASPCA). Online condolences and memories may be shared at www.WagleyFuneralHomes.com.

ADDISON- Patti Jean Casteel, age 72, of Devils Lake in Addison, MI, and a resident at the Jacqueline House Assisted Living in Cement City, MI passed away on November 4, 2019 surrounded by her loving family. Patti was born on March 19, 1947 to... View Obituary & Service Information

The family of Patti Jean Casteel created this Life Tributes page to make it easy to share your memories.

Send flowers to the Casteel family.