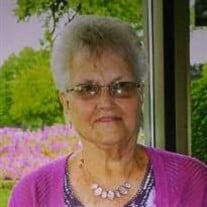 MILAN- Patsy Joan Bedolla, 83, of Milan, died Monday, January 27, 2020, at St. Joseph Mercy Hospital in Ann Arbor. She was born August 22, 1936, in Tecumseh, the youngest of eleven children from the union of the late Donald and Helen (Maltby) Sweet. She married LeRoy Ford on October 19, 1957, in Adrian, and he preceded her in death on September 19, 1992. Patsy lived her early life in Adrian and graduated from Adrian High School with the Class of 1954. After nursing school, she worked as a Licensed Practical Nurse in Ann Arbor at Mercywood, and later St. Joseph Mercy Hospital, where she retired in 1994. Patsy was proud of her green thumb, and every year produced beautiful flower beds and cultivated bountiful harvests of garden vegetables. She was also renowned among her family for her skills as a seamstress and enjoyed needlepoint and crocheting. Surviving are three children, Joann (Terry) Straits of Milan, Gregory Ford (and fiancée Cheryl Ann Winrick) of Britton, and Crystal (Michael) Nalli of Fenton, MI; nine grandchildren, Joshua Bertke, Jeremy Hall, Scott Hall, Joey Hall, Greg Ford Jr., Kyle Ford, Robert Ford, Caleb Nalli, and Madyson Nalli; and nine great-grandchildren. In addition to her husband, Patsy was preceded in death by a son, Edward Ford; daughter, Judy Hall; her 10 siblings; and a great-grandson, Triston Hall. A funeral service for Patsy will be held on Saturday, February 1, 2020 at 2 p.m. at Wagley Funeral Home in Adrian with her grandson, Pastor Caleb Nalli officiating. Burial will follow in Oakwood Cemetery. Visitation will be Friday, January 31, 2020, from 4 to 8 p.m. at the funeral home. Memorial contributions in Patsy’s honor may be made to her favorite charity, St. Jude’s Children’s Research Hospital. Online memories and condolences may be shared at www.WagleyFuneralHomes.com.

MILAN- Patsy Joan Bedolla, 83, of Milan, died Monday, January 27, 2020, at St. Joseph Mercy Hospital in Ann Arbor. She was born August 22, 1936, in Tecumseh, the youngest of eleven children from the union of the late Donald and Helen (Maltby)... View Obituary & Service Information

The family of Patsy Joan Bedolla created this Life Tributes page to make it easy to share your memories.

Send flowers to the Bedolla family.