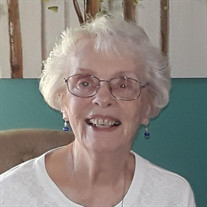 ADRIAN – Patricia (Pat) Susan (Slayton) Wilkins, 86, passed away from leukemia under the compassionate care of Hospice of Lenawee on March 21, 2022, after a life lived joyfully for family and the Lord. Patricia was born in Highland Park, MI, March 28, 1935, the daughter of Chester Louis Slayton and Grace May (Staples) Slayton, formerly of Muhlenberg County, KY. During World War II, her family moved to a small farm in Deerfield, MI, where Patty Sue later married Joe Raymond Wilkins of Central City, KY, on August 23, 1952. Pat graduated from Deerfield Public High School in 1953 as a married woman. Shortly after her graduation, Joe was drafted into the Korean War, so Pat lived in a turquoise trailer in Adrian, MI. When Joe returned, they moved to Deerfield. There, Pat gave birth to three children and worked for 27 years as a secretary for GERA Manufacturing Adhesives & Coatings. She taught Sunday School at the Deerfield Gospel Temple (the Free Methodist Church), filled in as a pianist, and served as secretary-treasurer. With her affinity for water, she and Joe became snowbirds in Florida. Eventually, they moved from the country and the home Joe had built to live in the village of Deerfield then Blissfield and later Adrian where they attended the Whiteford Wesleyan Church and Adrian’s Nazarene Church. Her passion for genealogy led her to join the Daughters of the American Revolution (DAR) and Lenawee County Family Researchers as well as write her family’s history. Throughout her life, Pat enjoyed playing games (especially cards) watching movies, growing flowers, shopping, going for drives, antiquing, listening to gospel music and television evangelists on WPOS, doing laundry, chatting over the phone, keeping an immaculate house, and nurturing her family. Surviving are her children, David Joe (Karen) Wilkins of St Cloud, FL, Linda Susan Wilkins (Chris) Lubrano of Adrian, and Randall Louis (Teresa) Wilkins of Adrian. She is also survived by her sister Helen (Peggy) Joyce Beck, her 4 grandchildren, her 3 great grandchildren, and several nieces, nephews, and cousins with whom she maintained a loving relationship. Funeral services to celebrate the life of Patricia S. Wilkins will be held on Monday, March 28, 2022 at 3:00 PM at the Wagley Funeral Home in Adrian with Pastor Scott Winstead officiating. Burial will be private at Deerfield Cemetery. Visitation will take place from 1:00 p.m. until the time of the service at the funeral home. Suggested memorial contributions in her name may be made to the Lenawee County Daughters of the American Revolution- Lucy Wolcott Barnum Chapter, The Salvation Army- Adrian, or Campus Crusade for Christ: give.cru.org. Online condolences and memories may be shared at www.WagleyFuneralHomes.com. “And whatever you do in word or deed, do all in the name of the Lord Jesus, giving thanks to God the Father through Him.” --Colossians 3:17

ADRIAN &#8211; Patricia (Pat) Susan (Slayton) Wilkins, 86, passed away from leukemia under the compassionate care of Hospice of Lenawee on March 21, 2022, after a life lived joyfully for family and the Lord. Patricia was born in Highland Park,... View Obituary & Service Information

The family of Patricia Susan Wilkins created this Life Tributes page to make it easy to share your memories.

Send flowers to the Wilkins family.