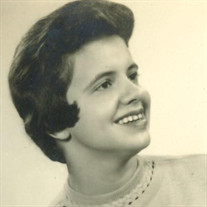 ADRIAN – Patricia Porter, 82, of Adrian, died unexpectedly Friday, April 2, 2021, at her home. She was born January 6, 1939, the only daughter to William T. and Doris M. (Muck) Wreath of Adrian. Patricia graduated from Adrian High School with the Class of 1956 and went on to earn her Associates Degree from Cleary College, majoring in accounting. On September 25, 1959, she married John F. Porter in Adrian and they shared 43 years together before his passing in 1996. John was an Adrian firefighter and Patricia belonged to the Adrian Fire Bells. The Bells were a group of wives from the local Adrian firefighters. Patricia worked in food services within the Adrian Public School system for many years. She enjoyed crocheting and collecting shells from the Great Lakes and the Atlantic Ocean; she was also a member of the First Presbyterian Church in Adrian. She is survived by their children, John Scott Porter of Adrian, Ann (Scott) Streber of Arizona and JoAnn (Steve) Samsel of Brooklyn. Patricia was preceded in death by her parents; husband, John; and brother William Wreath. Patricia had a queen’s personal grace and grit. Her resilience during these last years are proof of her grit. She was a most kind generous and caring person. She was always concerned with others over herself. Even as her health failed, her concentration was for others, even those she barely knew. Although, she suffered through the majority of her childhood, and adulthood, she persevered like a penitent saint. Her ambition to receive a four year college degree was stifled, as was her opportunity for a career. Her sense of nuance, subtlety and detail was far beyond her upbringing. Her favorite color was regal purple, and her regality was observed. Mercy was appealed and it was obliged. She is and will be much missed and not forgotten. She deserves a place in heaven. Visitation will be held on Thursday, April 8, 2021, from 10 a.m. to noon at Wagley Funeral Home, Adrian. Graveside services will immediately follow at Lenawee Hills Memorial Park, Adrian with Rev. Ann Marie Montgomery officiating. Following the Governor’s executive order, all attendees are required to wear a proper face covering, with the exception of those under the age of five years old or those who cannot medically tolerate. Memorial contributions may be made to First Presbyterian Church, Adrian. Online memories and condolences may be shared at www.WagleyFuneralHomes.com.

The family of Patricia Ann Porter created this Life Tributes page to make it easy to share your memories.

Send flowers to the Porter family.