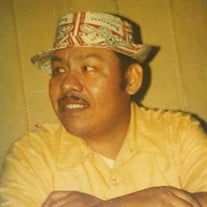 ADRIAN – Noverto Banda, 88, of Adrian, died early Friday morning February 4, 2022 at his home, surrounded by his family. Born June 6, 1933 in Carrrizo Springs, Texas, he was the son of Inocencio and Victoria (Rodriguez) Banda. The family lived and worked in Texas until they relocated to the Clinton, Michigan area when Noverto was a young child. Noverto worked as a field laborer until he enlisted in the United States Army. He proudly served during the Korean War. During his service, Noverto was awarded the National Defense Service Medal and the Army Occupation Medal and was a Carbine Expert. Upon returning stateside, Noverto began his employment at Tecumseh Products until he retired in 1984. In his spare time, he enjoyed fishing, hunting, and making people laugh. Noverto is survived by his brother, Juan (Helen) Banda of Tecumseh; sister, Angela Castorena of Milan; many nieces and nephews, whom Noverto cherished and was always there for; special niece and daughter, Renata Villarreal-Banks; numerous great-nieces and great-nephews; and a large extended family that will remember him for his big heart and sense of humor. In addition to his parents, Noverto was preceded in death by his sisters, Nieves Villarreal, Herminia Vargas, Amelia Bowers, and Maria Banda; and a brother in infancy, Jesse Banda. Funeral Services for Noverto will take place at 11:00 a.m. on Thursday, February 10, 2022 at Wagley Funeral Home, Adrian with his nephew, Michael Villarreal, officiating. Burial will follow at Lenawee Hills Memorial Park in Adrian. Military honors will be conducted by Annis Fint Post #1584 and American Legion Post #97. Visitation will be held on Wednesday from 5:00-8:00 p.m. at the funeral home. To honor Noverto’s memory, the family suggests that contributions be made to the Ann Arbor VA Medical Center, who cared for him. Online condolences and memories may be shared at www.WagleyFuneralHomes.com.

ADRIAN &#8211; Noverto Banda, 88, of Adrian, died early Friday morning February 4, 2022 at his home, surrounded by his family. Born June 6, 1933 in Carrrizo Springs, Texas, he was the son of Inocencio and Victoria (Rodriguez) Banda. The family... View Obituary & Service Information

The family of Noverto Banda created this Life Tributes page to make it easy to share your memories.

Send flowers to the Banda family.