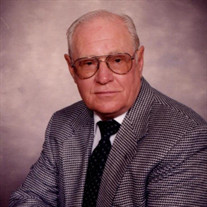 BLISSFIELD- Norman H. Retter, Sr. age 90, of Blissfield, died on Thursday, June 17, 2021 at home with his family by his side under the care of Hospice of Lenawee. Norman was born on March 14, 1931 to Henry and Otillia (Piotter) Retter on the family farm in Blissfield. He attended school in Blissfield and went on to serve our country in the United States Navy from 1951 to 1955, during the Korean era. After the service, Norm worked at REVCO in Deerfield for 18 years; and then went on to Ford Motor Company, retiring after 25 years. Like many farmers, Norm managed to raise crops and animals all the while he was working another full time job. Norm married Clara Weber on September 6, 1952 and they celebrated 44 years together before her passing in 1996. During this union they were blessed with two children, Norman Jr. and Sonya. On May 14, 1997 Norm married Andrea Moore and her three children, Jeff, Kim and Jackie were welcomed members to the Retter family. Norm and Andrea recently celebrated 24 years together; often splitting their time between Michigan and Florida with many adventures along the way. Norm was a member of Peace Lutheran Church in Florida and attended Immanuel Lutheran Church in Palmyra when back home in Michigan. Over the years, Norm enjoyed traveling with Andrea, golfing, fishing and spending time with his family In addition to his wife, Andrea, Norm is survived by their children, Norman Retter, Jr., Sonya Ramey, Jeff (Barbara) Glisson, Kim Bettingfield (John Powers) and Jackie (Michael) Mohn; 7 grandchildren and 4 great grandchildren. He was preceded in death by his parents; first wife, Clara; sisters, Viola Gerten and Virginia Wagner; twin brothers at birth; daughter-in-law, Judy Retter; and twin granddaughters, Brittney and Taylor. Funeral services will take place on Tuesday, June 22, 2021 at 11 a.m. at Wagley Funeral Home, Tagsold Chapel, Blissfield with Pastor Debi Humphreys officiating. Burial will follow at Lenawee Hills Memorial Park in Adrian. Full military honors will be provided by the Blissfield American Legion Post #325. Visitation will be held on Monday, June 21, 2021 from 4 to 8 p.m. at Wagley Funeral Home, Tagsold Chapel in Blissfield. Memorial contributions may be made to the Alzheimer’s Association. Online condolences and memories may be shared at www.WagleyFuneralHomes.com.

BLISSFIELD- Norman H. Retter, Sr. age 90, of Blissfield, died on Thursday, June 17, 2021 at home with his family by his side under the care of Hospice of Lenawee. Norman was born on March 14, 1931 to Henry and Otillia (Piotter) Retter on the... View Obituary & Service Information

The family of Norman H. Retter created this Life Tributes page to make it easy to share your memories.

Send flowers to the Retter family.