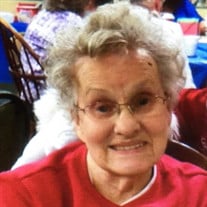 TECUMSEH – Nina May Thompson, age 94, of Adrian, passed away early Monday morning, January 25, 2021, at Tecumseh Place 1, Assisted Living while under the care of Hospice of Lenawee. She was born on October 1, 1926, the fourth child to Henry and Minnie (Woyahn) Thompson. Nina enjoyed growing up with her four sisters in Iosco County, where she graduated from Alpena High School. After graduation, Nina moved to Adrian and resided with her sister Florence and Brother-In-Law, Charles Demlow. She was a devoted sister and aunt, helping to care for her nephew, Stephen. She was employed at the General Telephone Company for 25 years, then later worked at Siena Heights University as the switchboard operator. She was an avid reader, once she started a book it was not unusual for her to stay up all night until she finished. Surviving Nina are her nephews Tom (Terry) Carlson of Arizona, John (Robin) Carlson of Tecumseh, Thomas (Laura) Huggler, Eldon (Antionette) Huggler, Michael (Diane) Berry and James (Helen) Berry; and many great-nieces and nephews. Nina is preceded in death by her parents and four sisters, Fern, and husband, Don Carlson, Florence and husband, Charles Demlow, Leona and husband, Eldon Huggler, Lucille and husband, Calvin Berry; and nephews, Stephen Demlow and David Huggler. The family would like to extend sincere appreciation to the staff of Tecumseh Place 1, who took great care of Nina during her 5 year stay, as well as the wonderful staff at Hospice of Lenawee who assisted in her care during the last year. A private graveside service for Nina will be held at St. John’s Lutheran Cemetery in Adrian where she will be laid to rest. In lieu of flowers, the family suggests memorial contributions be made to Hospice of Lenawee. Wagley Funeral Home, Adrian has been entrusted with arrangements, where online memories and condolences may be shared at www.WagleyFuneralHomes.com.

TECUMSEH &#8211; Nina May Thompson, age 94, of Adrian, passed away early Monday morning, January 25, 2021, at Tecumseh Place 1, Assisted Living while under the care of Hospice of Lenawee. She was born on October 1, 1926, the fourth child to... View Obituary & Service Information

The family of Nina May Thompson created this Life Tributes page to make it easy to share your memories.