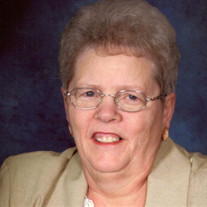 BLISSFIELD – Nina J. Beckey, 81, of lifelong resident rural Blissfield, died Saturday, January 25, 2020, in Phoenix, AZ, following a brief illness. Born February 6, 1938, she was the daughter of the late Frank and Vivian (Phillips) Byrd. Nina was a graduate of Adrian High School. She married Stanley M. Beckey on April 12, 1957, in Angola, IN. They enjoyed 62 years of marriage until he recently preceded her in death on April 13, 2019. Nina was an active member of the Palmyra Presbyterian Church where she served on the Women’s Association. She found joy in painting and creating ceramics. Nina also liked gardening, canning and hummingbirds. In her younger years, she was involved in 4H programs with her children. Travelling up North was also one of her favorite pastimes. Nina is survived by her children, Daniel (Barb) Beckey of Palmyra, Stanley (Tina) Beckey of Clinton and Caryn (Troy) Bechtel of Phoenix, AZ; daughter-in-law, Sue Ellen (Michael) Sheldon of Blissfield; two brothers, Thomas Jackson of Joshua Tree, CA, and Michael (Delores) Jackson of Van Wert, OH; a sister, Inez (Eldon) Clingman of Palmyra; 10 grandchildren; 11 great grandchildren; and her faithful friend, her dog, Raffi. In addition to her husband, she was preceded in death by a son, Robert Beckey and brother, David Byrd. A funeral service will take place on Sunday, February 2, 2020 at 2:00 p.m. at Palmyra Presbyterian Church with Rev. Douglas Holmes and Michael Sheldon officiating. Burial will follow at Palmyra Cemetery. Visitation will be held on Saturday, February 1, 2020 from 2:00 – 5:00 p.m. at Wagley Funeral Home, Tagsold Chapel in Blissfield. In lieu of flowers, memorial contributions to honor Nina are suggested to the Lenawee County Humane Society. Online condolences and memories may be shared at www.WagleyFuneralHomes.com.

The family of Nina J. Beckey created this Life Tributes page to make it easy to share your memories.

Send flowers to the Beckey family.