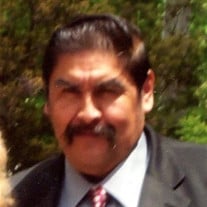 BLISSFIELD – Nicholas Villegas, Jr., age 62 of Blissfield, passed away Monday, January 22, 2018 at Ebeid Hospice in Sylvania. He was born December 24, 1955, the son of Nicholas and Julia (Mota) Villegas, Sr., and graduated from Blissfield High School. On January 20, 1989, he married Carol Porter in Adrian, and she survives. Nick worked for several companies in the area including Tecumseh Products for several years, and more recently Delphi/Inteva. He was an avid softball player, participating is several leagues in both Michigan and Ohio. Nick loved camping with family and friends at Camp Lily. In addition to his mother, Julia Villegas of Adrian, and Carol, his wife of 29 years, he is survived by children, Steve (Tammy) Bucher of Napoleon, MI and Melissa (Robert) Heidenescher of Seneca, MI; siblings, Viola (Robert) Bernal of Temperance, Fernand Villegas of Blissfield, and Andres (Dora) Villegas of Adrian; four grandchildren; three great grandchildren and numerous aunts, uncles, nieces, nephews, great nieces and great nephews. Besides his father, Nicholas Villegas, Sr., he was preceded in death by sisters, Cecilia and Julie Dixie Villegas. Funeral services will take place at 11 a.m., Saturday, January 27, 2018 at Wagley Funeral Home in Adrian. Burial will follow at Oakwood Cemetery. Visitation will be held at the funeral home Friday from 4 to 8 p.m. In lieu of flowers, memorial contributions are suggested to his family. Online condolences and memories may be shared at www.WagleyFuneralHomes.com.

The family of Nicholas Villegas Jr. created this Life Tributes page to make it easy to share your memories.

Send flowers to the Villegas family.