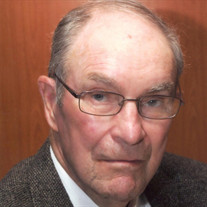 RIGA- Ned Elroy Salsbury, age 90 of Riga, passed away early Sunday, January 7, 2018, at Vibrant Life Senior Living, in Temperance, under Hospice care. Ned was born July 28, 1927, to Frank and Blanche (Borton) Salsbury in Fayette, Ohio. The family moved to Morenci when Ned was an infant. In 1943, the family moved to Riga, where Ned’s father worked as a tenant farmer. Ned attended Blissfield High School and was a member of the F.F.A. Chapter. He loved farming and it became his life occupation. In November of 1950, Ned was drafted into the Army and was sent to Korea with the AU.5. Signal Corps. After his honorable discharge, Ned joined his father in farming. Ned was an active member of the Riga Township Fire Department for 50 years. He was a member and former Director of the Farmers Antique Tractor and Engine Association in Adrian. Ned had a passion for tractors and going to tractor shows. On May 19, 1972, Ned married Jacqueline (Jackie) Laberdee at St. Thomas Aquinas Church in Toledo, Ohio and she survives. Ned and Jackie enjoyed traveling, especially cruises. Together, they have visited Hawaii, Alaska, the Panama Canal, and the Caribbean Islands. They have one son, Eric Ned (Sarah) Salsbury and two grandsons Nolan Eric and Nathan John, whom grandpa adored. Additionally, he is survived by a brother, Howard (Colleen) Salsbury; four nephews; one niece; and two godsons, Dan Salsbury and Martin Jones. He was preceded in death by his parents; a brother Reid; and two nephews, Mark and Brian. Funeral Services will take place at 11 a.m., Thursday, January 11, 2018, at Wagley Funeral Home Tagsold Chapel, Blissfield, with Fr. Jeffrey Poll officiating. Military honors will be presented by Robert Meachen Legion #325, Blissfield and VFW Post #1584, Adrian. Burial will follow at Riga Cemetery. Visitation will take place at the funeral home on Wednesday from 3 to 8 PM, and again on Thursday from 10 AM until the time of the service. Contributions in memory of Ned are suggested to Farmers Antique Tractor and Engine Association of Adrian, Riga Fire Department or the Multiple Sclerosis Society of Northwest Ohio. Online condolences and memories may be shared at www.wagleyfuneralhome.com.

The family of Ned Elroy Salsbury created this Life Tributes page to make it easy to share your memories.

Send flowers to the Salsbury family.