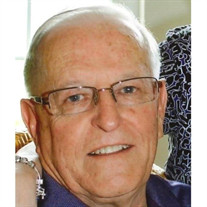 ADRIAN- Ned Thomas Rubel, 83, of Adrian died Saturday afternoon, August 15, 2020 at his home surrounded by his family while under the compassionate care of Hospice of Lenawee. Born January 19, 1937 in Bryan, OH, he was the son of Olan H. and Bertha (McDonald) Rubel. Ned was a 1955 graduate of Adrian High School. He enlisted in the United States Navy after high school and proudly served from 1955 to 1959. Following his military service, Ned returned to Adrian and began his 46-year career in the sporting goods industry. He worked as a salesman at Maumee Company Sporting Goods and became part owner. He retired from Maumee Company in 2000. An avid sports enthusiast his entire life, he continued to work in his retirement at Team Sports in Holland, OH for an additional 10 years. On November 6, 1965 Ned married Rebecca Brittain at the Adrian First United Methodist Church. She survives to cherish 54 years of memories they created together. In his spare time Ned loved traveling with Becky. Whether it is was a day trip exploring local back roads or a trip to the Smoky Mountains, Ned enjoyed the scenery and adventure. He also enjoyed tending to flower gardens and playing poker with his card group. Ned and Becky were faithful members of Christ the Redeemer Lutheran Church in Adrian. Ned was a lifetime member of the Moose Club in Bryan, OH. In addition to his wife, Becky, Ned is survived by his son Brian (Rebecca Prepejchal) Rubel of Ann Arbor; daughter, Beth (Matthew) Jakubik of Plymouth, MI; grandchildren, Luke Jakubik, Mia Jakubik, and Juliet Jakubik; sister, Miriam Castor; sisters-in-law, Marguerite Rubel and Waneta Rubel; and several nieces and nephews. Ned was preceded in death by his parents; granddaughter, Phoebe Jakubik; and siblings, Don Rubel, James Rubel, Gerald Rubel, Sharon Newing, and Lois Clarke; step-mother, Dorothy (Steele) Rubel; and step-sister, Phyllis Hagelberger. Per Ned’s wishes, cremation will take place. A memorial visitation will be held at Wagley Funeral Home on Tuesday, August 18, 2020 from 3:00-6:00 pm. Due to the health restrictions caused by the pandemic, the family is planning an outdoor memorial service at the Merillat Pavilion on the campus of Lenawee Christian School on Wednesday, August 19, at 2:30 p.m. Private interment of ashes will take place at Riverside Cemetery in Plymouth, MI. Following the Governor’s executive order, all attendees are required to wear a proper face covering, with the exception of those under the age of five years old or those who cannot medically tolerate; and follow safe social distancing practices. The family suggests that memorial contributions be made in honor of Ned’s beloved granddaughter, Phoebe Jakubik, to Ele’s Place Ann Arbor, a healing organization for grieving children and teens. Donations may be made online at elesplace.org/donate-ann-arbor or mailed to 5665 Hines Drive, Ann Arbor, MI 48108. Online memories and condolences may be shared at www.WagleyFuneralHomes.com.

ADRIAN- Ned Thomas Rubel, 83, of Adrian died Saturday afternoon, August 15, 2020 at his home surrounded by his family while under the compassionate care of Hospice of Lenawee. Born January 19, 1937 in Bryan, OH, he was the son of Olan H. and... View Obituary & Service Information

The family of Ned Thomas Rubel created this Life Tributes page to make it easy to share your memories.

Send flowers to the Rubel family.