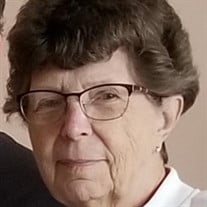 BLISSFIELD — Nancy Ann Sinclair, 78, of Blissfield, died Tuesday, June 30, 2020. She was born April 10, 1942 in Findlay, OH, to the late Joseph and Camilla Sue (Bartchlette) Nilles. On April 27, 1963, Nancy married Dale N. Sinclair in Toledo, one year after they met on a blind date. They were happily married for over 56 years until Dale preceded her in death earlier this year on February 19. In her childhood, Nancy resided throughout the United States, due to her father’s military service. Throughout their marriage, Nancy and Dale lived in many different places, due to Dale’s employment, before eventually settling in Blissfield where they raised their family. Nancy, a skilled seamstress, owned Nancy’s Fabrics for several years in downtown Blissfield on Lane Street, and became locally renown for her talent and eye for alterations. Later, she was employed as a saleswoman for several jewelers. Always active, she recently was sewing masks for numerous organizations in response to the pandemic. Her artistic and creative abilities were also presented in her painting, cake decorating and creating various stained-glass pieces. She was a troop leader and den mother for both the Girl and Boy Scouts, and always claimed to earn the first Boy Scout’s Wood Beads Badge as a woman. Later in life she enjoyed the companionship shared as members of the Red Hat Society and the Bliss-Liewert Senior Center. Nancy will forever be remembered for her talent and creativity, her kind-hearted nature, her quick wit, and her genuine character. Surviving are Nancy’s children, Scott Sinclair of Columbia, MO and Sally Sinclair (Theresa Warner) of Oconomowoc, WI; and a brother, Joseph (Candie) Nilles, Jr. She was preceded in death by her father Joseph; her mother, Camilla on June 17; and her beloved husband, Dale. Due to current regulations in response to the COVID-19 pandemic, a gathering for family and friends will take place at a future date. Wagley Funeral Home, Tagsold Chapel, Blissfield has been entrusted with the arrangements, where online condolences and memories may be shared at www.WagleyFuneralHomes.com.

The family of Nancy Ann Sinclair created this Life Tributes page to make it easy to share your memories.