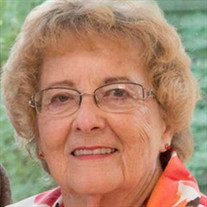 ADRIAN -- Nancy (Moore) Galbreath, age 83, of Adrian, passed away Sunday, February 23, 2020, at the Hospice of Lenawee Home in Adrian. Nancy was born January 22, 1937 in Jackson, Mich., to Verne and Golda (Byram) Moore of Allegan, Mich. Nancy met Roderick Galbreath in 1952. Rod enlisted in the Navy in September 1953, and Nancy graduated Allegan High School 1954. They were married on August 1st of that same year, and enjoyed over 65 years of marriage. In fall 1954, Nancy enrolled at Davenport College, completing her studies in the summer of 1955, when she went to work as secretary to the personnel director at Rockwell International. When Rod completed his naval service in 1956, he was accepted to the pharmacy school at Ferris State College where Nancy was employed as secretary to the director of residences and food service. The Galbreaths moved to Adrian in 1961, where Rod joined the pharmacists at Shepherd and Stoll. Nancy and Rod joined the First Presbyterian Church in 1964 where Nancy served as financial secretary for 20 years, followed by several more years until recently as secretary of memorials. Nancy also served as chairman of Adrian Co-op Nursery, and secretary of the Adrian Woman’s Club. Dear friendships were formed in an Adrian Newcomers bridge group, which has continued to meet monthly for nearly 55 years. She also enjoyed reading and baking, and found time to sew clothing for her daughters and Halloween costumes for her grandchildren. Songbirds and hummingbirds brought joy to her life, especially at Big Star Lake. Rod and Nancy also enjoyed traveling, and had fond memories of cruising Alaska with the entire family for their 50th wedding anniversary. In addition to her husband, Rod, she is survived by their children, Dr. Elizabeth (Dr. James Fikes) Galbreath, of Lexington, MA, and Megan (Roger) Steiger of Rochester Hills, Mich.; and three grandchildren, Jackson, Fay, and Lauren. Funeral services will take place at 11 a.m. Thursday, February 27, 2020, at Wagley Funeral Home with the Revs. Dean and Ellen McGormley officiating. Burial will be private in the Mt. Hope Cemetery in Waterloo Township, Jackson County. Visitation will be Wednesday from 3:00 – 7:00 p.m. at the funeral home. Contributions in memory of Nancy may be made to Hospice of Lenawee or the Lenawee Humane Society. Online condolences and memories may be shared at www.WagleyFuneralHome.com

The family of Nancy Moore Galbreath created this Life Tributes page to make it easy to share your memories.

Send flowers to the Galbreath family.