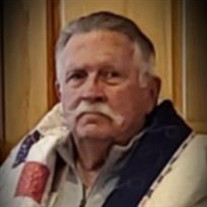 ADRIAN - Michael Tobey of Adrian, passed away November 12 at the University of Michigan Hospital. Born in Pasadena, California on October 31, 1943, Mike had a life full of adventure, love and bravery. Wanting to serve his country, Mike joined the Navy Reserves in 1961 and served a tour in Vietnam from 1965-66. He was a very proud Navy Seabee combat veteran attached to the construction battalion MCB9. He and his crew built some of the first roads in Vietnam and the China Beach Hospital near Da Nang. After Vietnam, Mike again served his country by joining law enforcement starting his career in Glendale, California. His career took him to Los Angeles where he served the Los Angeles District Attorney's Office - Bureau of Investigations. If you knew Mike, he had some harrowing stories to tell from this era in his life. During his law enforcement career, he met his first wife, Cheryl and had two beautiful children - Gregg and Tina. Cheryl is still a big part of the Tobey family. After retiring from the District Attorney's Office, Mike started his own business, CRP Racing Products. The remote control hobby industry was red hot and Mike had a very successful business. It was during this time in his life, he became a cowboy! Moving to Atascadero, California Mike had a whole new set of friends. Rodeo, trail rides, team penning became a way of life. On a trip to the the National Finals Rodeo in Las Vegas, Mike met the love of his life, Susan. Their mutual interests of horses was all it took for a love affair that lasted over 30 years. Marrying in Elko, Nevada during the Cowboy Poetry Gathering, Mike and Susan loved their horses, trail rides and attending rodeos. After living in Las Vegas, the couple moved to Arizona for ten years along with their horses, dogs and cats and were very involved in the community of Chino Valley. Mike's health started to decline and they decided to move to Michigan where Susan had family and the elevation was lower. Mike and Susan were members of the Adrian Noon Rotary Club and Mike was on the Board of Directors at Lenawee Humane Society. Sadly, this is where the story ends. Mike was preceded in death by his parents Earl and Andree' and his lovely sister Kim. Survivors are his loving wife, Susan, children Gregg (Cristy) Tina Conserva (Phil), Sister Teri and two beautiful Grandchildren Xander and Caden that were beyond special to him, Brother in Law John Fillinger (Susan) and Sister in Law Diana Paivanas. Numerous nieces and nephews scattered all over the US. Services for Mike will be held at Wagley Funeral Home, Adrian on November 30th. Visitation will start at 2pm and the service with military honor guard begins at 3pm. Refreshments to follow the service. The family request in lieu of flowers donations be made to the Lenawee Humane Society, 705 W. Beecher St. Adrian, MI 49221.

ADRIAN - Michael Tobey of Adrian, passed away November 12 at the University of Michigan Hospital. Born in Pasadena, California on October 31, 1943, Mike had a life full of adventure, love and bravery. Wanting to serve his country, Mike joined... View Obituary & Service Information

The family of Michael Tobey created this Life Tributes page to make it easy to share your memories.

ADRIAN - Michael Tobey of Adrian, passed away November 12 at...

Send flowers to the Tobey family.