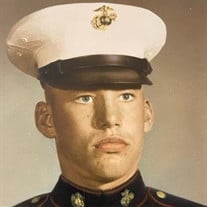 PALMYRA- Michael “Mike” James Warner, Sr., age 72 of Palmyra, died Tuesday morning, January 18, 2022, at home under the care of Hospice of Lenawee with his family by his side. He was born on August 28, 1949 in Adrian, MI, to James “Jim” and Vivian (Davis) Warner, the oldest of the five Warner boys. Mike attended Blissfield Schools and graduated with the Class of 1967. Mike served his country in the United States Marine Corps from 1967 to 1970 during the Vietnam War. On April 18, 1971 Mike married Diane Zibbell in Blissfield, MI and they celebrated 50 wonderful years together last April. Mike drove truck for Kuhlman Concrete for over 20 years before he retired. Mike enjoyed taking hunting trips and going with the family to Lake City, MI where they had a family cabin. Mike and Diane also went to the Florida Keys during the winter months. Mike was a proud family man and could often be found watching his oldest great-grandson, Cayden, playing baseball. He treasured his time with the younger great-grandchild too. He belonged to the Blissfield American Legion Post #325, where he served as Commander for several years. Always the life of the party, you could find Mike telling jokes and having a good time as he never knew a stranger. In addition to his loving wife, Diane, Mike is survived by his mother, Vivian Warner; his number one son, Michael “Micky” James Warner, Jr.; granddaughters, Harley (Dave) Jones and Bailey Warner (Mike Zander); great-grandhildren, Cayden Swift, Raylen and Cooper Jones, and Oliver and Stella Zander; brothers, Randy, Don, Jeff and Terry Warner. He was preceded in death by his father, Jim Warner. Following Mike’s wishes, cremation will take place with a memorial service to be held in the near future. Arrangements have been entrusted to Wagley Funeral Home, Tagsold Chapel in Blissfield. Online condolences and memories may be shared at www.WagleyFuneralHomes.com.

The family of Michael "Mike" James Warner Sr. created this Life Tributes page to make it easy to share your memories.

Send flowers to the Warner family.