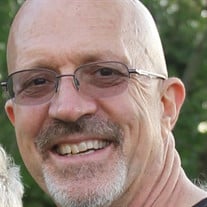 ADRIAN--Michael William Metcalf, 63, a retired Army infantry officer of 20 years, worked at Adrian College as the Database Administrator for the school’s learning management system, died of an acute aortic dissection August 6th in Bixby Hospital, Adrian. Michael was born in Windsor, Colorado to Norman and Lynda Metcalf, the middle of five children. After graduating from the United States Military Academy in 1976, Michael served as an infantry officer and an airborne Ranger for 20 years before retiring from active duty in 1996. Michael and his family lived in Toledo, Ohio from 1992 – 2008, where he worked in various positions ranging from adjunct professor at Owens Community College to the Medical College of Ohio, now part of the University of Toledo Health Campus. He was an active member of his church communities, always volunteering his time to play guitar for the praise and worship teams and lead small-group Bible studies. His hobbies included his daily walks, golfing, playing his guitars, and loving on his grandchildren. Mike is survived by his wife of 38 years, Teresa A. Metcalf (McKenna), of Adrian, MI; his four children, Jennifer of Cincinnati, OH, Christopher of Toledo, OH, Jessica of Coldwater, MI, and Jonathan of San Antonio, TX; his mother, Lynda of Fort Collins, CO; his four siblings, Esther-Lynn of Cheyenne, WY, Norma-Kay of Windsor, CO, Randy of Milliken, CO, and Rex of Cheyenne, WY; and his eight grand-children. Funeral services will be on Saturday, August 12, 2017, at 11:30 a.m. at The Church in Birmingham (Calvary Chapel), 212 Paine Street, Toledo, OH with Pastor Brian Elmer officiating. Burial will follow at Toledo Memorial Park. Full military honors will be conducted by the Lambertville VFW #9656 Honor Guard. Visitation will take place on Friday, August 11, 2017 at Wagley Funeral Home, Adrian from 2 to 8 p.m. and again on Saturday from 10 a.m. until the time of the service at the church. The family suggests that contributions in memory of Michael be made to their family to defray his wife, Teresa’s ongoing medical expenses at https://funds.gofundme.com/dashboard/teresa-metcalf-stroke-recovery-fund. Online condolences and memories may be shared at www.WagleyFuneralHome.com.

The family of Michael W Metcalf created this Life Tributes page to make it easy to share your memories.

Send flowers to the Metcalf family.