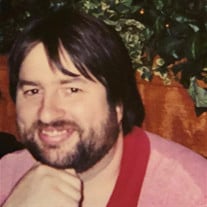 BLISSFIELD – Michael Brown, age 56, of Blissfield, passed away Friday, January 11, 2019, at ProMedica Toledo Hospital, with his loving family by his side. Michael was born August 24, 1962, the son of Lawrence A. and Ruth M. (Miller) Brown. He graduated in 1980 from Northwest High School in Canal Fulton, Ohio and worked as a machinist for many years, most recently at Alpine in Hudson, Michigan. A diehard Detroit Red Wings fan, Michael shared his love of the game with any who would listen over a large, unsweetened iced tea, and proudly wore the iconic winged wheel daily. His pastimes included tinkering with model trains, spending weekends with his children, and working alongside his brothers, Dave and Brian. An Eagle scout, Michael lived the Scout Oath and Law as a loving and devoted father, brother, son, uncle, nephew, cousin, and friend. He is survived by his father, Lawrence A. (Sandi) Brown; children, Joshua (Britney) Brown and Megan Brown; girlfriend Laurie Mosley; brother David Brown, sister Laura Brown, brother Brian (Anna) Brown; many nieces and nephews; as well as his dog, Samantha. He is preceded in death by his mother, Ruth. Visitation for Michael will be from 3 to 6 pm, Tuesday, January 15, 2019 at Wagley Funeral Home, Tagsold Chapel, Blissfield. The funeral services will be at 6 pm following the visitation with childhood friend, Pastor Jim Gindlesberger officiating. All are encouraged to wear their favorite Detroit Red Wings gear, after all it is game day. In lieu of flowers, the family requests you support the growth of hockey and keep Michael’s love of the game alive by making a memorial contribution to the Detroit Red Wings Foundation. Online condolences and memories may be shared at www.WagleyFuneralHomes.com

BLISSFIELD &#8211; Michael Brown, age 56, of Blissfield, passed away Friday, January 11, 2019, at ProMedica Toledo Hospital, with his loving family by his side. Michael was born August 24, 1962, the son of Lawrence A. and Ruth M. (Miller) Brown.... View Obituary & Service Information

The family of Michael Brown created this Life Tributes page to make it easy to share your memories.