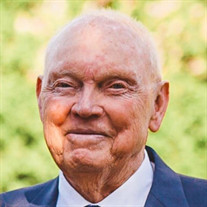 PUNTA GORDA, FLORIDA – Merrill E. Bales, 87, of Manitou Beach, MI, Punta Gorda, FL and formerly of Adrian, MI died early Friday morning, June 17, 2022. Born January 17, 1935, in Adrian, he was the son of Virgil and Olga (Schultz) Bales. Following his high school graduation in 1952, Merrill attended Adrian College. On June 28, 1953, Merrill married Judith Anne Jasmund. She survives to cherish almost 70 years of love and memories. He began working at the family business, Bales, Inc., that was founded by his father and great-grandfather. Hard work and dedication to the family business of trucking and excavating ran in his blood. At the young age of eleven years old, Merrill had moved his first load of topsoil. In 1986 Merrill was named the CEO of Bales Trucking. In 1997, after 45 years in the family business, Merrill formally retired and passed the business on to the next generation. Merrill was devoted to his family and enjoyed spending time with them whether sitting by the water, fishing or traveling long distances. He and Judy made many trips to the Caribbean and Alaska, and traveled to New Zealand, Australia and South America. Their adventures included traversing the Panama Canal, the St Lawrence and Mississippi River as well as caravanning through Mexico and Canada. Merrill enjoyed serving and was very active the communities in which he lived. He chaired the Lenawee County Road Commission for 24 of the 25 years he served. He also was Chairman of the City of Adrian Planning Commission, serving for 17 years. Merrill loved being near the water and was a proud member of the Devils Lake Yacht Club for nearly 50 years, where he was named Commodore in 1977 and was Fleet Captain of Fleet #31. He served as a Board Member of the Lenawee County Historical Society. Faith was also very important to Merrill. He attended the Trenton Hills United Brethren Church for decades and was a member of the Burnt Store Presbyterian Church in Florida. In his spare time, Merrill, known in sailing circles as MB, enjoyed racing and participated in many regattas in Michigan, the Midwest and as far as Florida and New Jersey. Merrill and Judy loved dancing together – square dancing, line dancing, and ballroom dancing. Merrill was often the caller, showing his tendency to rise to leadership in whatever organization he served. Merrill was well known (especially around the Lake) for his green thumb. He and Judy were avid gardeners and his beautiful acres of roses, hostas, lilies and daffodils were the source of joy to many and toured by Garden Clubs from as far as Toledo. In addition to his beloved wife, Judy, Merrill is survived by his children, Merri-Jo Bales (Randy Sahajdack) of Manitou Beach, and Howard (Dawn) Bales of Adrian; six grandchildren Jill (Ben) Rainwater, Kyle (Jana) Keller, Brandi Bales, Corey (Whitney) Keller, Tom (Jen) Sahajdack, and Caitlin (Jeff) Glancy; 12 great-grandchildren Bailey, Wyatt, Carly, Leah, Allegra, Johann, Janice, Skyler, Chase, Hunter, Hailee, and Ryder; his siblings, Judy Lee (Don) Ford of Adrian and Tim (Peggy) Bales of Adrian; and sisters-in-law, Sandra (Robert) Mitchell, Joanne (Richard) Rosener and Mary Ellen Bales. And many wonderful friends and neighbors. In addition to his parents, Merrill was preceded in death by his grandson, Adam Bales; great-grandson, Waylon Keller; and brother, Virgil “Bill” Bales. A funeral service for Merrill will take place on Friday, June 24, 2022 at 11:00 a.m. at Wagley Funeral Home, Adrian with Rev. Larry Betz officiating. A graveside service will follow at 2:30 p.m. at Greens Lakeside Cemetery in Manitou Beach. Visitation will be held on Thursday from 5:00-7:00 p.m. at the funeral home. The family suggests that memorial contributions in Merrill’s name be made to Tunnel to Towers or Wounded Warriors. Online condolences and memories may be shared at www.WagleyFuneralHomes.com.

The family of Merrill E. Bales created this Life Tributes page to make it easy to share your memories.

Send flowers to the Bales family.