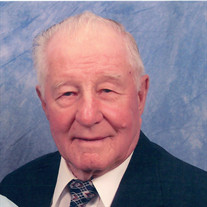 ADRIAN – Thursday, April 12, 2018, Melvin Julius Reeck died as he lived, peacefully, having spent precious time in the midst of the family he loved completely. He was 98 years of age. Born February 8, 1920, in Taylor, Michigan, he was the oldest son of the late William and Emma (Koch) Reeck, and grew up working on the family farm. During World War II, he was stationed in the Philippine Islands while serving in the Army Air Corps. On November 29, 1947, Melvin wed Frances (Green) Herrmann, a young widow with three small children, whom he immediately adopted. Thus began a love story that lasted over 70 years. Melvin and Frances purchased a farm in Palmyra in 1954. It was at this family farm that Melvin, through his example, taught their children a strong work ethic, and sowed seeds of patience, kindness and generosity. Melvin took pride in sharing the vegetables he grew and the bird houses he built. His bird houses can be found from the east coast to the west coast. Melvin lived a life of faith. Jasper Bible Church was an important part of his life. In addition to his wife, Frances, he is survived by their children: Marilyn (Donald) Smith of Adrian, Frances Landwehr, also of Adrian, Donna (Briscoe) Ellett of Rossville, TN, Audrey (John Scalzitti) Kazimir of Sarasota, FL, Andrea Miller of Franklin, WI, Benjamin Reeck of Attica, MI, and Barbara (David) Wagley of Adrian; son-in-law, Jimmy Kitts of Brookfield, WI; daughter-in-law, Linda Reeck of Tecumseh, MI; numerous grandchildren, including great and great great grandchildren; and a host of nieces and nephews. Besides his parents, he was preceded in death by a daughter, Melanie Kitts; a son, Jack Reeck; sisters, Rachel Koths and Helen Niemann; and brothers, Emery and Eldon Reeck. Funeral services for Melvin will take place at 11 a.m., Tuesday, April 17, 2018, at Wagley Funeral Home in Adrian with Rev. Bruce Jewett and Rev. Linda Farley officiating and military honors conducted by the VFW Annis Fint Post #1584 and American Legion Post #97. Burial will follow at Palmyra Cemetery. The family will welcome friends at the funeral home Monday from 4 to 7 p.m. Contributions in memory of Melvin are suggested to Jasper Bible Church Building Fund. Online condolences and memories may be shared at www.WagleyFuneralHomes.com.

ADRIAN &#8211; Thursday, April 12, 2018, Melvin Julius Reeck died as he lived, peacefully, having spent precious time in the midst of the family he loved completely. He was 98 years of age. Born February 8, 1920, in Taylor, Michigan, he was... View Obituary & Service Information

The family of Melvin Julius Reeck created this Life Tributes page to make it easy to share your memories.

Send flowers to the Reeck family.